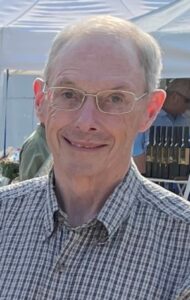 Born in Lebanon, Oregon, Alan was the son of Albert E. and Frances (Hildebrand) Grobe. He graduated from high school in Lebanon. He went on to graduate with his bachelor’s degree in business administration from Oregon State University and his master’s degree from Portland State University. Alan would also serve in the National Guard for six years.

It was while living in Portland, Oregon, that he got to know his neighbor, Marilyn L. Jacobson. The two would marry on February 14, 1969, at Immanuel Lutheran Church in Plymouth and welcome two children, Kim and Shawn.

The couple would raise their family in Tualatin, Oregon, and Alan would retire from Northern Nekooska Paper Products as a general manager. They attended Living Savior Lutheran Church in Tualatin, and after retirement worked for the Stephen Ministries.

They would move from Tualatin to Plymouth, Indiana, in 2020 and attend Calvary Lutheran Church, where he continued his strong faith.

Alan was extremely loving, generous, giving, and caring to all. He was an honest, hardworking man. He raised his kids to be responsible, driven and gave them all the advice and tools to succeed in life. Alan loved detailing and taking care of his personal cars and his neighbors’. He enjoyed yard work and would be outside for hours every day, tending to his yard or his neighbors’, both in Plymouth and back in Tualatin. His greatest joy was being with his grandchildren and attending their activities.

He is survived by his wife of 53 years, Marilyn, and their children, Kim (Tom) Tessier of San Francisco, CA and Shawn (Patty) Grobe of Plymouth; grandchildren, Allison, Evan and Grant Grobe; and sister, Valerie (Jim) Root.

He was preceded in death by his parents.

Funeral Services will be held at 11 a.m. on Friday, September 16, 2022, at Calvary Lutheran Church, 1314 N. Michigan Street, Plymouth. Visitation will resume one hour prior.

Burial will follow in the Immanuel Lutheran Cemetery, Plymouth.

Memorial contributions can be made to the church.