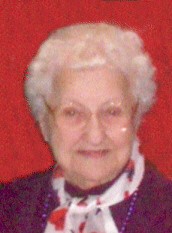 Lifetime Hoosier Arvada June Culp Hauber died on May 13, 2012 in The Advanced Health Care Facility Glendale, AZ.
June was born in rural Marshall County on June 1, 1920 the daughter of Stephen and Stella Woodsmall Culp. She was one of 11 children, seven girls and four boys.
She graduated from Tyner High School with the class of 1938. After high school she attended South Bend Vocational school and was a machinist at Bendix during WWII. After the war was over she worked as a school secretary at Miller Elementary and deputy assessor for many years. She also attended IU Calumet for enrichment.
On May 27, 1943 she became the bride of John Hauber, after 43 years of marriage he died on July 13, 1990.
June was a lifetime member of VFW Auxiliary Post 360, Mishawaka, transferring from Post 1563, Merrillville, IN. She was also a member of St. Bavo Catholic Church, Mishawaka; SOAR; Independent Order of Foresters; and The Red Hat Club “Sassie Lassies”.
She had many pleasures in life, among them were getting together with her high school classmates as often as possible for lunch in Plymouth, some of the girls had gone from the first grade thru high school together. They had such a good time, her doctor had once told her “That is a better medicine than he could prescribe”. They would laugh together and cry together and act like young school kids again. Smiling and laughing releases healthy hormones. “What fun we had,” said June. She also enjoyed the monthly family card games, and was an avid Notre Dame fan.
June is survived by one son William of Arizona and a sister Avice Culp Perry of Texas. Also surviving are numerous nieces and nephews, among them are Mickey Williams of Mishawaka, and Judy Klinedinst of South Bend.
She was preceded in death by her husband John, her parents, brothers George, Hamlet, Carl, Robert; and sisters Daisy Carlberg, Ada Pike, Elnora MaGee, Clara Masterman, and Anne Malcolm.
A time of sharing with the family will be held on Monday May 21, 2012 from 10 a.m. to 12 p.m. in the Johnson-Danielson Funeral Home 1100 N. Michigan Street Plymouth, IN 46563. A funeral service officiated by Fr. Barry England, Pastor of the St. Bravo Catholic Church will immediately follow visitation at 12 p.m. in the funeral home.
Burial will be in the New Oakhill Cemetery, Plymouth.
Memorial contribution in honor of June may be give to St. Bravo Catholic Church, 511 West Seventh Street Mishawaka, IN 46544 or to the charity of the donor’s choice.