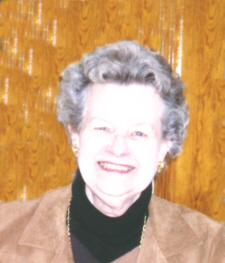 Adaline Louise Kucera, 501 Pennsylvania Ave., Plymouth, died of natural causes on Monday, March 31, 2008. She was 78-years-old and had lived in the Marshall County area for 57 years.
Adaline was born on April 24, 1929, in Wanatah, Ind. She was the daughter of Jewels Warren and Lela Hancock Steinberg.
Adaline graduated from Knox High School in 1948.
She and Douglas Milan Kucera were married, Douglas died in 1987.
Adaline worked at the Shirt Shed in Culver and Grants and Ben Franklin stores in Plymouth.
She was a member of AARP and Women’s Connection.
Two daughters and three sons survive Adaline.
Her daughters are Rebecca (Allen) Wade, Plymouth and Susan Bruneau, Carol Stream, Ill., and her sons are Douglas (Linda) Kucera, Gary Kucera, all of Plymouth and Gregory (Trina) Kucera, Lafayette, Tenn.
A sister, Dorothy Singleton, Knox, survives as well, along with nine grandchildren, and eight great-grandchildren.
A sister-in-law, Leona Steinberg, Lansing, Ill. and a brother -in-law, William (Pat) Kucera., Seminole, Fla. also survive together with a sister-in-law, Lori (Robert) Machacek, Lombard, Ill.
Adaline was preceded in death by her parents, her husband, Douglas, and Donald Singleton, a brother-in-law. Also deceased are sisters Elizabeth Hyndman and Iva Irene Harris and a brother, Warren “Bud” Steinberg.
Friends are invited to celebrate the life and share memories of Adaline Louise Kucera from 4 to 8 p.m. on Wednesday, April 2, 2008, and will continue at 7 a.m. Thursday April 3, 2008 in the Johnson-Danielson Funeral Home, 1100 N. Michigan St., Plymouth.
Funeral service for Adaline will be held in the funeral home at 10 a.m. on Thursday, April 3, 2008. The Rev. John Branch, pastor of the Plymouth Wesleyan Church, will officiate.
Burial will be in New Oakhill Cemetery, Plymouth.
Memorials in Adaline’s memory may be made to the American Diabetes Association or the American Heart Association.