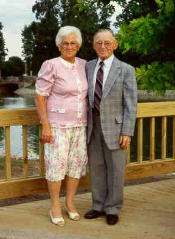 Adaline Marie “Aunt Addie” Carlson, 88, 1015 Blue Stone Court, Ft. Wayne, formerly of Plymouth died at 12:50a.m., Thursday, March 28, 2002 at Select Specialty Hospital in Ft. Wayne, IN.
Born July 30, 1913 in Craigville , IN , she was the daughter of Daniel U. Gerber and Frances Alice Reimschisel Gerber. Adaline attended Craigville schools.
She was married to Albert Carlson on September 24, 1936 in Chicago , IL , who survives.
Adaline had worked at Swanson Hatchery for a while as well as for Menser Industries of Plymouth, retiring from Menser’s in 1979.
“Aunt Addie,” as many referred to her, enjoyed canning vegetables, baking cookies and coffeecakes and sharing these treats along with a cup of coffee with friends. She loved tending to her flower garden and eating ice cream but most of all she cherished time spent with her family and grandchildren. She was a long-time devoted member of the Immanual Lutheran Church of Donaldson. Adaline is survived by her husband, Albert, a son, Max E. Gerber of Los Angeles, CA, two daughters, Sandra M. and William Dunn of Columibia, Maryland, Joyce A. and Curtis Hite-Moore of Ft. Wayne, Five grandchildren, 15 great-grandchildren and one great, great-granddaughter. Preceding her in death were her parents, a son, Carl Albert Carlson, five brothers, Ezra, Perry, Edward, Eli, and George and four sisters, Ruth, Catherine, Aldine, and Amanda. Friends visited with the family on Monday, April 1, 2002 , from 4 to 8 p.m. in the Johnson – Danielson Funeral Home, 1100 North Michigan St. Plymouth and one hour prior to funeral services which were held at 11:00 a.m., Tuesday, April 2, 2002 at the Immanuel Lutheran Church of Donaldson at 6835 Union Road, Donaldson with Rev. Brian Deckinger officiating. Burial was in the Immanuel Lutheran Cemetery , Donaldson. Memorial gifts in Adaline’s memory may be made to the Immanuel Lutheran Church of Donaldson or The Alzheimer’s Research Foundation