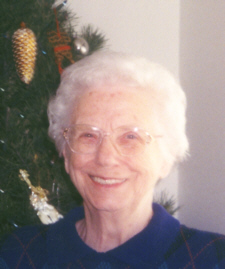 Adine Peregrine, a lifetime Marshall County resident, died at her home, 4291 N. Michigan St., Plymouth, at 6:45 p.m. on Tuesday, April 11, 2006.
She was 97-years-old.
Born in Plymouth on April 3, 1909, Adine was the daughter of John R. and Rosa Anders Snyder.
She went to Plymouth schools until the 10th grade.
Adine and Wallace F. Peregrine were married in Plymouth on June 4, 1927. Wallace died on June 1, 1983.
She was a receptionist for Dr. Bottorff for 13 years. She also baked delicious pies for local businesses for three years.
She was adept with her hands. She enjoyed crafts of all kinds, she loved to sew aprons and baby quilts. She enjoyed reading her Bible and was a member of the Cornerstone Community Fellowship.
Adine is survived by three daughters and two sons. Her daughters are Betty and Dale Cox, Lakeville; Margaret Ann and Kenneth Cramer, Glendale, Arizona and Juanita D. Scarborough, Plymouth.
Her two sons are David L. and Marianne Peregrine, South Bend, and Wallace F. and Margaret Peregrine, Plymouth, Indiana.
Twenty grandchildren, 46 great-grandchildren and 11 great-great-grandchildren survive her as well..
Adine was preceded in death by her parents, her husband, an infant daughter, Sally Ann Peregrine, six brothers and five sisters and a son-in-law, Robert Scarborough.
Friends are invited to come to celebrate the life of Adine Peregrine on Thursday, April 13, 2006, from 1 to 3 p.m. in the Johnson-Danielson Funeral Home, 1100 N. Michigan St., Plymouth.
Funeral services for Adine will follow visitation at 3 p.m. in the funeral home. Pastor Stephen Cox of the Cornerstone Community Fellowship will officiate.
Burial will be in Oakhill Cemetery, Plymouth.
Memorial gifts in Adine’s memory may be made to the Cornerstone Community Fellowship or the Center for Hospice.