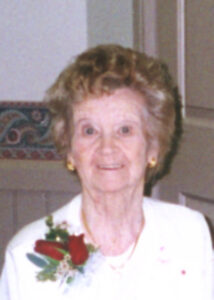 Agnes B. Fortin, 96, died at Pilgrim Manor, 222 Parkview St., Plymouth, at 2:50 a.m. on Monday, August 31st, 2009.
Agnes was born the daughter of William J. and Nora B. (Allen) Doody, in Whiting, IN. She graduated from Whiting High School in 1930, and attended Business College in East Chicago.
Agnes and Levern C. Fortin were married in Whiting, IN. on June 26, 1935. Levern died on April 23, 2004.
A homemaker, Agnes lived in Whiting for 59 years and in Clearwater, FL. for 29 years. They moved to Plymouth in 2000.
Agnes was a member of St. Michael’s Roman Catholic Church.
She loved her family and social entertaining of guests in her home. She enjoyed bingo, playing cards and penny gambling along with a good Chicago Cubs game. Agnes and her husband camped throughout the United States in a travel trailer.
She is survived by five sons. They are Edwin (Joan) Fortin, North Las Vegas, NV.; William (Marilyn) Fortin, Plymouth, IN.; Charles Fortin, Hampstead, MD.; Timothy (Mary Ann) Fortin, Merton, WI.; and Thomas (Debbie) Fortin, Hendersonville, NC.
Eleven grandchildren and twelve great-grandchildren, survive together with a sister, Helen Higgins of Placentia, CA.
Agnes was preceded in death by her parents, her husband, Levern Fortin, and by three brothers and five sisters. The brothers are: William, Robert and Msgr. Timothy Doody. Her sisters are Sister Marie Annette Doody, Margaret Dolly Farrell, Mary Horvath, Nora Kammer and Annette Doody.
A Memorial Funeral Mass will be held on Friday, September 25th at 11 a.m. in St. Michael Roman Catholic Church, 613 N. Center St., Plymouth. The Rev. Fr. William Kummer will officiate. Burial will take place in the Curlew Hills Memorial Garden, Clearwater, Fl.
In lieu of flowers, Agnes had requested that gifts in her name be given to St. Michael’s Catholic Church, School or the OPZ playground project.