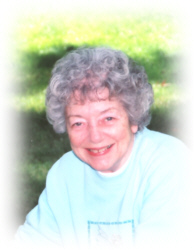 Agnes R. Shei, 79, formerly of Culver, residing for the past four years at Miller’s Merry Manor, Plymouth, died there at 6:43 p.m. on Wednesday, Dec. 26, 2007.
Born in LaCrosse, Ind., on August 31, 1928, Agnes was the daughter of Carl S. and Katherine L. (Howell) Bigler.
She graduated from Hamlet High School with the class of 1946 and earned her beauticians license from Fort Wayne Beauty College in 1948.
On Feb. 18, 1950, in Hamlet, Ind., Agnes and Kenneth J. Shei were married. Kenneth preceded her in death on May 29, 1982.
For over 30 years she owned and operated the Country Beauty Shop in Culver. She had many faithful clients and loved her work. After moving to Corpus Christi, Texas, she continued to serve as the beautician for the Heartland Nursing Home for a period of 15 years. Her last four years of practice was at Ancilla Domini for the Poor Handmaids of Jesus Christ, a time that she thoroughly enjoyed.
She liked taking long walks and oil painting, but most of all she loved visiting with her friends and playing games with her family especially her grandchildren.
Agnes was a member of St. Michael’s Catholic Church, the NTL Cosmetology Association and the Eagles Auxiliary.
She is survived by four daughters. Peggy F. Mattox of Bristol, Susan D. Danielson, Sara M. (Terry) Jolly, both of Plymouth and Katherine M. (Dale) Graves of Lapel, Ind.
A sister, Gail B. West of Kansas City, Mo., also survives, together with nine grandchildren and three great-grandchildren.
In addition to her parents and her husband, Agnes was preceded in death by a daughter, Lou Ann Shei and a grandson, Kaleb Mattox and a son-in-law Tony Mattox.
Visitation with Agnes’ family will be on Friday, Dec. 28, 2007, from 4 to 8 p.m. (E.D.T.)in the Johnson-Danielson Funeral Home, 1100 N. Michigan St., Plymouth. A rosary will be prayed at 8 p.m.
A Mass of Christian Burial will be held at St. Michael’s Catholic Church, 613 North Center St., Plymouth, at 11 a.m. (E.D.T.)on Saturday, Dec. 29, 2007. The Rev. Father William Kummer will officiate.
Burial will follow in Burr Oak Cemetery.
Memorial gifts in Agnes’ memory may be made to the Alzheimer’s Association.