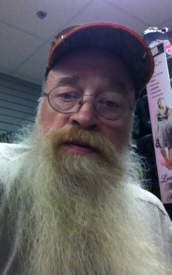 Alan “Al” Frederick Martin, 60, of Argos, IN, died unexpectedly at 3:50 a.m. on Saturday, April 27, 2013 at Saint Joseph Regional Medical Center – Plymouth Campus. Al was born June 13, 1952 to Charles W. and Doris Martin in Plymouth, Indiana. He graduated from Brandywine High School in Niles, MI. He received an associate’s degree in photography from Ivy Tech Community College.
He joined the United States Navy in 1970, and was a Vietnam veteran. He served on the USS Gurke from March, 1970 until April, 1972. He was reassigned to the USS John R. Craig from April, 1972 until February, 1974. He was honorably discharged in 1974. He was a member of the Argos American Legion.
On December 28, 1970, in California, Al married Donna L. Roberts, who preceded him in death on June 2, 2012. Al is survived by children Marty (Lisa) Martin of LaPorte, IN, Dawn (Jim) Morgan of Plymouth, IN, Andrew Martin of Plymouth, IN, and Macy (Casey) Hornung of Fargo, ND. He is also survived by his “Ma”, Effie Mae Rowe of Argos, IN; brothers Ehler Martin of Zanesville OH, Charles Martin of Bourbon, IN, Anthony Martin of South Bend, IN, and John Martin of Spiro, OK. He is also survived by his eight grandchildren: Bridget, Brittney, Timothy, Cody, A.J., Kasper, Romie, and Dawson.
He was preceded in death by his parents, sisters, Charlotte and Virtue, a brother, Edwin, as well as several aunts, uncles, cousins, nieces, and nephews.
Al was a loving father, grandfather, brother, uncle, cousin, and friend. He was an avid gun enthusiast, fisherman, and gold prospector. He always had a kind smile and a warm hug for everyone he saw. He loved everyone he met with his whole heart. Visitation will be held on Wednesday, May 1 from 6:00 p.m. to 8:00 p.m. and 10:00 a.m. until 11:00 a.m. on Thursday, May 2 at Johnson-Danielson Funeral Home, 1100 N. Michigan St., Plymouth, IN. Services will be held at 11:00 a.m. on Thursday, May 2 at the funeral home. Burial with military honors provided by members of the Argos American Legion Post and South Bend Honor Guard will follow at New Oakhill Cemetery, Plymouth.
In lieu of flowers, the family requests memorial contributions be made to the Al Martin Memorial Fund at Teacher’s Credit Union.