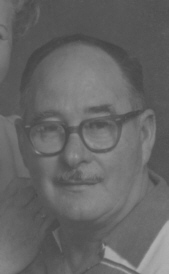 Albert “Al” Kuchel, 81, a Plymouth area resident most of his life, died in Saint Joseph Regional Medical Center, Plymouth, following a one week illness, at 5:42 a.m. on Tuesday, October 24, 2006.
Born in Marinette, Wisconsin, on November 26, 1924, he was the son of Peter and Johanna Mueller Kuchel. He attended Grovertown schools.
A United States Marine, Al served in World War II, along with five of his brothers at the same time.
On September 4, 1948, in the First United Church of Christ in Plymouth, Al and Delores J. Watson were married. Delores died on June 23, 1999.
Al farmed for several years in Grovertown along with his father and a brother. He also worked for a short time at Kingsbury Ammunitions. His lifetime work, however, was at McCord’s where he was employed for 43 years, retiring in 1989.
For 20 years, he was on the Plymouth Special Police Service, retiring in 1981.
A family man, Al enjoyed being with his children and grandchildren.
He was a member of the Plymouth American Legion, Post 27, the Plymouth VFW Post 1162, the Plymouth Moose Lodge and the F.O.P.
Al is survived by two daughters and sons-in-law. They are Rita and Raymond Shankle of Deerwood, Minnesota, and Donna and J.T. Temple of South Bend.
Six grandchildren, eight great-grandchildren and three great-great-grandchildren survive as well. He was preceded in death by his parents, his wife, Delores, a grandson and seven brothers: Henry, Peter, Jacob, Joseph, Rudolph, Richard and an infant brother.
Friends are invited by the family to celebrate the life of Al Kuchel at the Johnson-Danielson Funeral Home, 1100 N. Michigan St., Plymouth, on Friday, October 27, 2006, from 2 to 4 and 6 to 8 p.m.
A Moose Lodge service will be held in the funeral home at 8 p.m. on Friday.
Funeral services for Al will be held on Saturday, October 28, 2006, at 1 p.m. in the funeral home.
The Rev. Thomas Short, pastor of the North Liberty Church of Christ, will officiate.
Burial will be in New Oakhill Cemetery where military graveside rites will be accorded him by the Plymouth American Legion Post 27 and the Veterans of Foreign Wars, Marshall County Post 1162.
Memorials in Al’s memory may be made to the North Liberty Christian School for the Scholarship Fund.