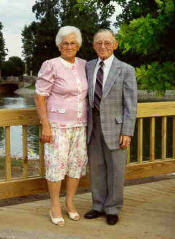 Albert Carlson, 94, a longtime Donaldson area resident and farmer, died at 5:35 a.m. on Friday, May 10, 2002 , in Renaissance Village Retirement Center , Ft. Wayne , Ind. , where he has resided since February of this year. A native of Bokon, Sweden, near Ronneby; Albert was born the youngest of five children, on Sept. 24, 1907, the son of Karl Johan and Olivia Anna Pearson Karlsson. His family were potato farmers, as they remain yet today. Albert moved to the United States in 1927. On Sept. 24, 1936, in Chicago, Ill., Albert and Adaline Marie Gerber were married. Adaline died, six weeks ago, on March 28, 2002. Albert worked many years as a carpenter in Chicago and the South Bend area, he retired as a member of the Carpenter’s Union Local #413. He did the finishing work at the family home in Donaldson. He began farming in 1943, using ‘horse’ power before obtaining a tractor. Albert once said; “I would listen for the corn to grow.” He enjoyed farm animals and over the years he raised them all; including the usual dogs and cats. Always a hard worker; rain or shine, from early morning till late at night. Following his retirement, Albert was there with helping hands, he was known to tinker, do a little work, visit, do a little more work and visit some more, endearing him to family and friends. He never knew a stranger. He loved his church, Immanuel Lutheran, Donaldson, his family and, especially, his sweet Adaline of more than 66 years. Albert is survived by a son, Max E. Gerber, Los Angeles, Calif., and two daughters and sons-in-law, Sandra M. and William Dunn, Columbia, Maryland, and Joyce A. Hite-Moore, and her husband Curtis of Ft. Wayne, Ind. Five grandchildren, 15 great-grandchildren and one great-great-granddaughter also survive. Those surviving in Sweden are: Astrid Ahstrom, nephews; Bertal Mauritson and Roland Karlsson, who resides on the family farm, and nieces; Gota Abramson and Vega Hogstrom and their families. Albert was preceded in death by his parents, his spouse, a son, Carl Albert Carlson and a brother; Henrik and three sisters; Beda, Hildagard and Signe. Friends are invited to come to celebrate Albert’s life with his family on Monday, May 13, 2002 , from 4 to 8 p.m. , in the Johnson-Danielson Funeral Home, 1100 N. Michigan St. , Plymouth , and for one hour prior to services in the church on Tuesday. The funeral services on Tuesday, May 14, 2002 , will be at 11 a.m. in the Immanuel Lutheran Church , 6835 Union Road , Donaldson. The Rev. Brian Deckinger, pastor of the church, will officiate. Burial will follow in the church cemetery. Memorial gifts in Albert’s memory may be made to the Immanuel Lutheran Church , Donaldson or the Alzheimer’s Research Foundation.