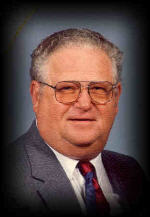 Albert E. “Bud” Woldman, 73, died at 1:58 p.m., Thursday, Oct. 31, 2002, in Parkview Hospital, Ft. Wayne, following a sudden illness. Bud has lived at 805 Baker St., Lot 17, for the past 12 years, coming from Elmhurst, Ill. He and his wife Tracy have spent the past several winters at Bonita Springs, Fla. Bud was born in Chicago on Dec. 8, 1928, the son of Edwin Peter and Grace Jager Woldman. He attended Chicago Christian High School. Following school, Bud worked as a career lithographer over a period of 40 years; both for the Newman-Rudolph Lithograph Co. of Chicago and during the Korean War, while stationed in Germany where he printed maps. He retired in 1987. Bud was proud to have served in the United States Army from 1951 to 1953. On Dec. 8, 1950, in the 1st Reformed Church of Berwyn, Ill., he took Tracy Herlien as his bride. Bud and Tracy loved to bowl and roller skate as a couple. Self taught, he became an accomplished musician who first played the accordion, soon the piano and then the organ much to the delight of his family and friends. He enjoyed Gospel music and was an enthusiastic Chicago Cubs fan. The couple enjoyed travel, Bud loved the mountains and spent much time visiting and hiking in the Colorado Rockies. He sang bass in the Trinity United Methodist choir and he and Tracy were known to many as they delivered “Meals on Wheels” for over 10 years. Bud is survived by his devoted wife and their children and grandchildren. Daughter Beverly R. Woldman (Patrick J.) Woods, Plymouth, and their children, Christine P., Gregory A. and Matthew R. Woods; son Edward A. Woldman, Elmhurst, Ill. and his twin daughters, Alison Rae and Carrie Ann Woldman; and daughter Debra L. Woldman and friend, Lynda Stickelmaier, who Bud and Tracy considered to be their adopted daughter, both of Warrenville, Ill. Two sisters, Evelyn (Dan) Teune, Willowbrook, Ill., and Janet Braun, N. Riverside, Ill., numerous nieces and nephews and a much-loved church family survive Bud’s death as well. Bud was preceded in death by his parents and a sister. Visitation with the family will be held in the Johnson-Danielson Funeral Home, 1100 N. Michigan St., Plymouth, on Sunday, Nov. 3, 2002 from 3 to 8 p.m. Eastern Standard Time Funeral services will be at 10:30 a.m. EST on Monday, Nov. 4, 2002, in the funeral home. The Rev. Maurice Grindle, pastor of the Trinity United Methodist Church will officiate. Burial will be in New Oakhill Cemetery, Plymouth. Memorial gifts in Bud’s memory may be made to the Trinity United Methodist Church.