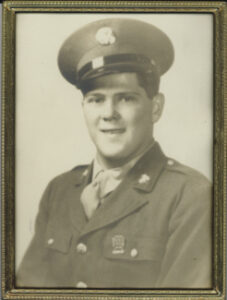 Albert L. “Abe” Smith, 88, a resident of Olive Trail in Plymouth, passed away at 11:25 p.m. Sunday evening, November 6, 2011 in the St. Joseph Regional Medical Center – Plymouth Campus.
A lifetime Plymouth resident, Albert was born on March 6, 1923 the son of William R. and Minnie M. (Neidlinger) Smith. He was a 1942 graduate of Argos High School.
On January 27, 1943 he enlisted in the U.S. Army with service in Normandy, Northern France, Rhineland and Central Europe. He was awarded four Bronze Stars and honorably discharged on December 8, 1945. He was a member of the American Legion and V.F.W. Posts in Plymouth.
Abe was a dedicated employee of the McCord Corporation in Plymouth for over 46 years and retired in 1986.
He enjoyed being outdoors farming, gardening and also woodworking.
Abe is survived by his devoted wife of 63 years, the former Betty J. Geisleman. The couple was married in Plymouth on July 31, 1948 and became the parents of five children. Three survive along with their children, they are: Carol S. (Donnie) Meadow of Culver and children; Sean L. (Hannah) Meadows and Jeremy Meadows. Alan L. Smith and children; Todd A. (Laury) Smith and Jana L. Smith. Janet L. (Timothy) Manuwal and children; Thad A. (Amanda) Manuwal, Jaymie L. Manuwal and her fiancé Randy. Five great grandchildren also survive.
Preceding in death were two infant sons, sisters; Mildred Lowry, Garebell Malicki and Fern Dietl as well as a brother Russell Smith and a great granddaughter.
Friends are invited to a visitation from 4 – 8 p.m. on Friday, November 11, 2011 in the Johnson-Danielson Funeral Home, 1100 N. Michigan St., Plymouth, where services will be held on Saturday at 10:30 a.m. The Rev. Mark Allen pastor of Plymouth Sunrise Chapel will officiate.
Burial will follow in the Oakhill Cemetery with Military Honors provided by members of the American Legion Post 27, Veterans of Foreign Wars – Marshall Co. Post 1162, D.A.V. and the South Bend Honor Guard Unit.
Memorial gifts may be given to the American Cancer Society – Relay For Life, 130 Red Coach Drive, Mishawaka, Indiana 46545