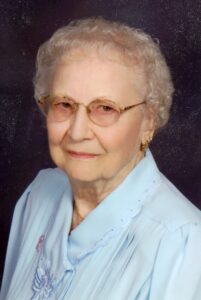 Born in her family home in Monterey, Indiana on September 6, 1922, Alberta was middle of 11 children born to Edward C. and Ida E. (Appler) Master. She graduated from Monterey High School with the class of 1941.

In St. Anne’s Catholic Church in Monterey, Alberta married William A. Wilcockson on April 21, 1951. The couple would move to Plymouth that same year and begin their family. They would welcome four children through the years: Elizabeth J. “Betty”, Rebecca A. “Becky”, Richard M. “Rick” and James A. “Jim”.

She was a phenomenal seamstress. When her children were small, she made all of their clothes. She made clothes for other people also. She worked for Prices Cleaner’s doing alterations. Through her sewing she touched many lives and made many lasting friendships. One time there was a little girl making her First Communion at St Michael’s church, her parents didn’t have the money for her dress. Alberta made the dress and gave it to the little girl. The parents were so grateful that they bought a beautiful statue of the Virgin Mary to show their appreciation. She treasured it always. She also enjoyed crocheting and sewing.

A devout Catholic, Alberta was a long-time member of St. Michael Catholic Church in Plymouth. She served as a past officer on the Altar Rosary Society and a member of the Harvest House. Over the years she did many things for the church: helping make donuts to be sold after mass, working in the gift shop for many years, hemming the altar vestments, helping clean the church and any other task the church asked for help with.

She worked for H & R Block for many years and received a plaque for 25 years of service, and retired 2001. She was an avid reader of various genres. Alberta was also a member of the Women’s Bowling League in Plymouth.

She was preceded in death by her parents; daughter Rebecca and by her 10 brothers and sisters: John, Martha, Phillip, Rudolph, Karl, Jack, Wilma, Dorothy, Pauline, Jean.

Family burial will be held in St. Anne’s Catholic Cemetery in Monterey, Indiana at a later date.