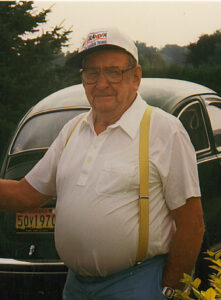 Albertus M. Drake, 92, died Monday, September 19, 2005, in the home of his daughter surrounded by his loving family in Lakeland, Florida. A former Plymouth resident, he had been a Marshall County resident most of his life.
Born on September 11, 1913 in Tyner, Albertus was the son of Albert M. and Josephine M. Campbell Drake. He was a 1932 graduate of Tyner High School.
On August 14, 1937, Albertus and Della E. Luse were married in Plymouth.
Albertus retired in 1970 from Plymouth Elevator and Coal, where he had worked for over 30 years, delivering coal in the winter and animal feed in the summer.
He attended Pretty Lake Trinity United Methodist Church.
Up until his death, Albertus enjoyed the simple pleasures of riding his bike, early morning walks and telling stories to his granddaughters.
Albertus is survived by Della, his wife of 68 years, a daughter, Cathy R. and Ed Criswell of Laketon, Florida, and a son David A. Drake of Florida.
Also surviving are five granddaughters, and a sister, Annabelle Miller of Walkerton.
He was preceded in death by his parents, an infant daughter, Sharon K., three sisters: Evelyn Davis, Lola Pavey and Blanche Welch, three brothers: Keith C. Drake, John Drake and Roy Drake, and a half sister, Marie Shaffer.
Friends will be welcomed to celebrate Albertus’ life on Friday, September 23, 2005 from 4 to 8 p.m., in the Johnson-Danielson Funeral Home, 1100 N. Michigan St., Plymouth.
Funeral services conducted by the Rev. Charles Krieg, pastor of the Salem United Church, Bremen, will be held at 10:00 a.m. on Saturday, September 24, 2005 in the funeral home.
Burial will be in New Oakhill Cemetery, Plymouth.
Memorial gifts in Albertus’ name may be made to the American Red Cross or a charity of the donor’s choice.