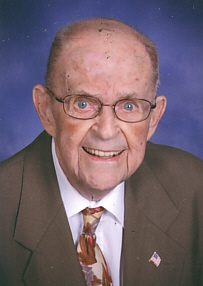 Albion V. “Al” Schultz, 93, a resident of the Lake of the Woods, Bremen, Indiana, has passed away. Since March of this year Al has resided at Liberty Village in Clinton, Illinois where he passed away at 2:06 p.m. on Thursday, September 6, 2012.
Al was born in Thornton, Illinois on April 27, 1919, the son of William C. and Lillian (Werel) Schultz.
On Valentine’s Day in 1942 he took as his bride the former Mildred “Millie” Schultz and enjoyed 59 years together. In October of that year Al joined the U.S. Army and served as a Staff Sergeant during WWII until February of 1946.
Al was a proud employee of Lever Brothers in Hammond, Indiana for over 30 years as a soap maker, retiring in 1979.
He was dedicated to his church, St. Paul’s Lutheran, in Bremen, where he served as a director of parish fellowship for 20 years, assisted in the building project and volunteered at the school.
Al held membership in both the Bremen V.F.W. and American Legion Posts.
He is survived by his two daughters; Carol J. Coy of Clinton, IL and Janet L. (Jim) O’Boyle of Henderson, NV. Five grandchildren also survive; Shannon O’Boyle of Henderson, Steven O’Boyle of Carol Stream, IL, Kellie Diene of Newark, NJ, Alicia Johnson of Clinton, and Matthew VanSoest of Bremen. Great-grandchildren; Makenzie, Dillon, Sean, Kyle, Riley and William also survive.
Al was preceded in death by his wife Millie on June 10, 2001, a granddaughter; Colleen O’Boyle, a grandson; Patrick O’Boyle, a son-in-law; Jim Coy, two brothers; William Schultz and Allen Schultz, and two sisters; Maizie Zanders and Beulah Bloom.
Visitation will be held in the St. Paul’s Lutheran Church, 605 S. Center Street, Bremen, on Sunday, September 9th from 2 – 5 p.m. (EST). Visitation will continue at the church after 9 a.m. on Monday, September 10th until time of services at 10 a.m. (EST). Pastors Roger Rhode and Neil Wonnacott will officiate. Military honors will be accorded Al at the church by members of the Bremen VFW Post 8972 and Bremen American Legion Post 191. A luncheon will then follow at the church.
A committal service will be held at 2 p.m.(CST) Monday in the Oak Glen Lutheran Cemetery, 2200 Indiana Avenue just west of Torrence Avenue in Lansing, IL.
Preferred are memorial gifts to St. Paul’s Lutheran School, 605 S. Center St., Bremen, IN 46506.