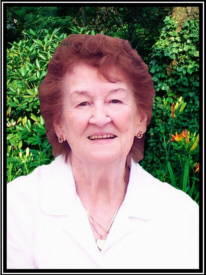 Alice B. Munroe, 86, living at 15227 Yorkshire Drive, Plymouth, since May 2004, having come from Belmont, Massachusetts, died unexpectedly of natural causes in Saint Joseph Regional Medical Center, Plymouth, at 8:50 a.m. on Wednesday, September 19, 2007.
Born in Cambridge, Massachusetts, on March 26, 1921, she was the daughter of John P. and Margaret T. (Riordan) Mulqueeny.
She graduated from St. John’s High School in Cambridge, Massachusetts, with the class of 1939, and then completed studies at Mt. Auburn School of Nursing, also in Cambridge.
Alice served as a Navy nurse in World War II. She tended to then Lt. John F. Kennedy who was injured in the Solomon Islands on August 2, 1943, when his PT-109 was sliced in half by a Japanese destroyer.
After the War, on January 18, 1947, in Cambridge, Alice and Charles L. Munroe were married in St. John’s Roman Catholic Church. Charles died on April 13, 1980.
Alice applied her position as a Registered Nurse in various ways serving the community. She retired in 1982.
Very artistic, she enjoyed oil painting nature scenes. She loved to read and work crossword puzzles. Known to her family as a very “classy lady” she enjoyed dancing with her husband and being a part of family gatherings.
Alice is survived by three daughters and three sons. Her daughters are: Paula M. (Ronald) Babcock, Sr., Lenore Munroe, and Mary C. (Vernon) Spoor all of Plymouth.
Her sons are Charles L. (Karen) Munroe, Sr., Concord, New Hampshire: John P. (Nancy) Munroe, Holden, Massachusetts: and James R. (Cheryl) Munroe, Mt. Gilead, Ohio. Eleven grandchildren and one great-grandchild also survive together with a sister, Pauline R. Mulqueeny of Plymouth and several nieces and nephews.
Alice was preceded in death by her spouse, and two sisters, Margaret Mulqueeny and Lenore P. Bowman Friends will be welcomed by her family to celebrate the life of Alice Munroe on Saturday, September 22, 2007, from 2 to 3 p.m. at St. Michael’s Roman Catholic Church, 613 N. Center, Plymouth, where she was a member.
A Mass of Christian Burial will follow visitation at 3 p.m. on Saturday in the church. The Rev. Father William Kummer will officiate.
Military honors will be accorded Alice following Mass outside the church.
Burial will be in St. John’s Cemetery in Cambridge, Massachusetts. In lieu of flowers, memorial donations in Alice’s memory may be made to St. Michael’s Catholic School – Playground Development Fund.