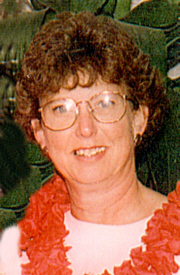 Alice J. Gross, 67, passed away at 9:50 a.m. on Thursday, March 12, 2015 in Miller’s Merry Manor, Culver.
Alice was born on June 20, 1947 in Rochester, Indiana to Harold and Margaret (Becker) Linn. She graduated from Triton High School with the class of 1965.
On December 11, 1971, Alice and Bob Gross were united in marriage in Bourbon, Indiana.
She had worked at Ridge Co. in Plymouth as an outside sales representative for 21 years.
Alice and Bob took their children on many camping vacations out west and in most of the National Parks.
An avid seamstress, Alice made a lot of the children’s clothes. She also loved to cook and was an avid fisherwoman.
Alice was a former Worthy Matron of the Eastern Star and she attended Pretty Lake United Methodist Church.
She is survived by her husband, Bob, and their five children: Don E. Gross of San Diego, Ca, Greg C. Gross of San Francisco, CA, Laurie L. Allen of Union, OR, Jennifer J. (Dave) Hull of Mentone and Melissa Patrick of Plymouth. Also 11 grandchildren and 9 great-grandchildren, and her sister, Jennifer Hoff.
She was preceded in death by her parents.
Visitation will be from 4 to 8 p.m. on Tuesday, March 17, 2015 in the Johnson-Danielson Funeral Home, 1100 N. Michigan Street, Plymouth.
Funeral services will be at 10:30 a.m. Wednesday, March 18, 2015 in the Pretty Lake United Methodist Church, officiated by the Rev. Tamara Boggs.
Burial will be in the Burr Oak Cemetery.
Memorial contributions can be made to the Alzheimer’s & Dementia Services, 922 E. Colfax Ave., South Bend, Indiana 46617.