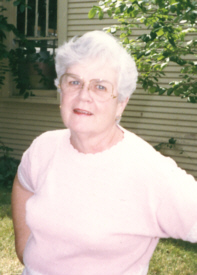 Alice Jane Ryan, 75, died of natural causes at 4:30 p.m., on Tuesday, December 12, 2006, at her home, 8435 7th Road, Plymouth. A resident since 2001, she came here from South Bend; she was formerly from Bristol, Indiana.
Alice was born in Chicago, Illinois, on October 12, 1931. She was the daughter of Gerald and Marian Griffin Smith.
She completed her elementary education at Waukegan’s Immaculate Conception Grammar School and graduated from Holy Child High School with the Class of 1950. She then received her Bachelor of Education degree from Northern Illinois University in 1968 and her Masters from DePauw University in 1974.
She was married to Frank Joseph Ryan on October 18, 1952, in Waukegan, Illinois.
Alice was an art teacher for many years. In 1968 to 1974, she taught at Ben Davis High School and in the Indianapolis area public schools. She then taught in Palos Verdes, California from 1974 to 1976, after which she returned to Indiana, where she enjoyed the Bristol family farm with its thoroughbred horses.
Her greatest sense of satisfaction in her working career was 15 ½ years as a Child Welfare- Adoption Case Worker with St. Joseph County, as an advocate for children of all backgrounds.
Alice was a skilled vocalist, artist, and scholar who passed those traits on to her children, as did her mother who also was very talented.
She is survived by her husband and their two daughters and three sons.
Her daughters are: Ann M. and Kieran Mathieson, Rochester Hills, Michigan; and Marian “Molly” and Jeremy Springler, Fishers, Indiana.
Her sons are: Patrick J. and Mary Beth Ryan, Plymouth, Indiana; Terance F. and Robin Ryan, Claremont, California, and Kevin R. and Caroline Ryan, Bloomington, Indiana.
Alice’s eight grandchildren are: Crystal, Quincy, Cullyn, Greer, Madeline, Daniel, Teagan and Asher.
A brother and sister-in-law, Robert and Stephanie Smith of Winthrop Harbor, Illinois, survive as well.
Alice was preceded in death by her parents and a daughter, Sheila M. Ryan.
Friends are invited to share memories of Alice with her family from 3 – 6 p.m. on Sunday, December 17, 2006, at the Johnson-Danielson Funeral Home, 1100 N. Michigan St., Plymouth and continue on Monday 1 hr. prior to services in the church.
A Mass of Christian Burial for Alice, who was a member of St. Michael Roman Catholic Church, 625 N. Center St. Plymouth, will be held on Monday, December 18, 2006, at 11 a.m. The Rev. Father William Kummer will officiate.
Burial will be in St. Michael’s Cemetery.
Memorial gifts in Alice’s memory may be made to St. Michael Tuition Assistance Fund, c/o Marshall County Community Foundation.