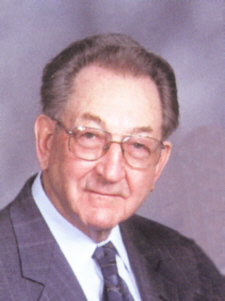 Allen Edward “Ed” Eastlund, 222 Parkview Ave., Plymouth, died in Pilgrim Manor, at 11:25 am on Sunday, July 12, 2009. Born on August 10, 1918, in Lucas, South Dakota., Ed was the son of Allen Hilder and Maude Inez Frevert Eastlund.
He graduated from Argos High School in 1936.
On May 9, 1970, in Nappanee, IN., Ed and Marietta “Mary” Kaufman were married. Mary died in 2005.
Ed was retired, He was the former owner of Eastlund-Naylor Insurance agency in Nappanee, and he also managed an apartment complex in Carrollton, Texas. For several years Ed worked at the Marshall Co. Historical Museum.
He was a devoted member of the First United Church of Christ, and was a Kiwanian in Nappanee.
He loved working with his hands and was an expert woodworker. He also loved to cook.
Ed is survived by two sons: Gary (Linda) Eastlund, Leesburg, IN., and Marvin (Phyllis) Eastlund, Fort Wayne, IN., and a daughter, Sharon M. Gray, Lafayette, IN.
Two step-daughters, Marcia (Ron) Martin, Plymouth, and Melody A. (Doug) Corey, of Argos, also survive.
Several grandchildren and numerous great-grandchildren survive as well, together with three sisters. They are Lillian (Ralph) Plummer, Indianapolis: Dorothy (Don) Robinson, Indianapolis, IN., and Lois Thompson, Pittsburg, PA.
A step-brother and a step-sister, both of Rochester, IN., also survives. They are Eddie (Joan) Waltz and Barbara (James) Rock.
Ed was preceded in death by his parents and three sisters and a brother: Olive Rynearson and Gladys Kamp, Eunice Kindig, Charles Eastlund.
Visitation will be held from 4 to 8 p.m. on Tuesday, July 14, 2009, in the Johnson-Danielson Funeral Home, 1100 N. Michigan St., Plymouth, and for one hour prior to services in the First United Church of Christ, 321 N. Center St., Plymouth at 11 a.m. on Wednesday, July 15, 2009.
The Rev. Dr. Ron Liechty and Rev. Tom Padberg will officiate.
Burial will be in New Oakhill Cemetery, Plymouth, Ind.
Memorials in Ed’s memory may be given to the First United Church of Christ.