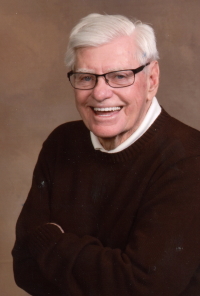 Allen Hartman, 85, a lifetime Marshall and Kosciusko County resident, passed away on Thursday, March 19, 2020, surrounded by his family’s love. A Celebration of Life will be held on Thursday, June 25, 2020 from 2-4 p.m. in the Johnson-Danielson Funeral Home, 1100 N. Michigan Street. Services will follow at 4 p.m. in the funeral home with Pastor Toni Carmer officiating. Military Honors will be rendered following the service.
Al was born to Merritt and Eva (Beacraft) Hartman on January 29, 1935, in Warsaw, Indiana. He was educated in the Warsaw school system, graduating in 1953. After graduation, he went into the U.S. Air Force on December 21, 1953, serving as a B-36 bombing navigator until his honorable discharge on September 1, 1956. After leaving the Air Force, Al joined the Warsaw Fire Department until his retirement as Assistant Chief in 1985. This was a true calling, as he enjoyed every workday. On his off days, he worked as an electrician. He was a member of the American Legion, Post #27 in Plymouth and past member of Plymouth Country Club. He had also belonged to the Bremen Sky Knights, flying remote control airplanes he had built himself. Al was good at everything he did, enjoying photography, painting, billiards, and woodworking. Repairing and building were strong skills of Al’s; he was a real handyman. Al had a quick-witted sense of humor and always loved a good joke. He always had a comeback and was very friendly. Al never met a stranger. Surviving him is his wife of forty years, Lynn (Wyatt) Hartman; four sons, Tony Hartman of Warsaw, IN; Chad (Sherry) Rapp of Silver Lake, IN; Bill (Missy) Hartman of Warsaw, IN; and Matt (Sheri) Rapp of Claypool, IN; grandchildren Angela Keener, Julie Hartman, Ryan Rapp, Trevor Delacruz, Sydney Hartman, and Trenton Rapp; five great-granddaughters; brother-in-law Stan Stokes; several other family members and friends. He is preceded in death by his parents, Merritt and Eva Hartman, and his sisters Marcia Stokes and Beverly Fifer. In lieu of flowers, memorial contributions can be made in Al’s name to Marshall County Humane Society, P.O. Box 22, Plymouth, IN 46563 or to Center for Hospice Care, Plymouth Office, 112 S. Center St., Suite C, Plymouth, IN 46563.