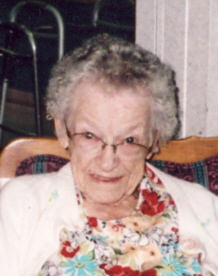 Former South Bend and Plymouth resident, Alyce M. (Mrs. Fawn) Fritz, 92, passed away at 10:50 a.m. on Thursday, September 1st at the Bremen Health Care Center where she has resided the past four years.
Alyce was one of six children born to Ray O. and Jessie M. (Turner) Baker. She was born in Ramsey, North Dakota on April 12, 1919. The family moved to the Marshall County area and Alyce graduated with the LaPaz High School Class of 1937.
She then attended nursing school and was later trained by Dr. Arnold Dunfee Sr. as a dental assistant for many years. Prior to her marriage she worked as a secretary for the Bendix Corporation.
On June 5, 1948 in South Bend, she married Robert W. Magnuson. He would precede her in death in 1952. She then married Fawn J. Fritz on May 23, 1953 in Constantine, Michigan. He then preceded her in death on August 31, 2006.
Alyce was an excellent homemaker who also cleaned homes for the Clemans Trucking Family in South Bend.
She enjoyed embroidery, baking pies nearly every day, spending time with Fawn in the woods and collected bird figurines, rare stones and lighthouses.
She had been active at the Pleasant View Missionary Church in Lakeville and assisted her husband with the Lakeville Lions Clubs many activities.
Surviving are her two children; Sharon M. (Ron) Hootman of Ft. Wayne, and Kenneth R. (Vicki) Fritz of South Bend. Grandchildren include: Zachary (Sarah Freeman) Fritz of Mishawaka, Lucas Fritz of South Bend, Heather Fritz of Moberly, Missouri, Caleb Fritz of South Bend, Scott Hootman and Jeff Hootman both of Greenwood, Ind and Kristin Hootman of Indianapolis. One great-granddaughter, Elyse M. Hootman-Bullen of Indianapolis also survives.
Alyce was preceded in death by her spouses, two sisters; Wilma Beyler and Erma Suter and three brothers; Glenn, Stanley and Deane Baker.
The family will receive friends from 4 – 7 p.m. on Monday, September 5th at the Johnson-Danielson Funeral Home, 1100 N. Michigan St., Plymouth, where services will be held at 10:30 a.m. Tuesday. Pastor Bradley Bohrer will officiate.
Burial will follow in the Oakhill Cemetery, Plymouth.