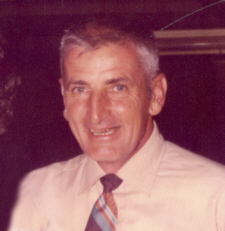 Ambrose Mathew Pozorski, 84, died at 10:20 pm on Monday April 12, 2010 in Miller’s Merry Manor, Plymouth, Indiana
Born in Browerville, Minn., on February 15, 1926, Ambrose was the son of Felix and Gertrude Ostrowski Pozorski. He attended Monterey High School and was a veteran of World War II, serving in the Pacific from 1945 to 1946.
On August 6, 1949 in St. Michael’s Catholic Church, Ambrose and Loretta A. Harness were married. Loretta died on Nov. 4, 2000.
Ambrose was the owner-operator of the DX Station in Plymouth. He also worked as heavy equipment operator with the Operating Engineers Local 150
Ambrose enjoyed his time with his family and friends on Lake Maxinkuckee on his pontoon boat. He liked playing cards and socializing with his many friends and family members.
Ambrose was active in and a member of the Moose, Eagles, VFW and American Legion.
Ambrose is survived by his son, Gregory Mathew Pozorski of Argos and by three sisters; Florence “Polly” Matthews, Winfield, Kansas, Mary Ann Best, Indianapolis, Indiana; Evelyn “Lindy” Pozorski, Plymouth, Indiana, and a brother Francis Joseph Pozorski, Kokomo, Indiana.
Ambrose was preceded in death by his parents, his wife and three sisters; Berniece Davis, Sister Mary Victoria Pozorski, Margaret “Peggy” Pozorski, and two brothers; Stanley Pozorski, and Lawrence “Larry” Pozorski.
Friends will be welcomed to share memories with Ambrose’s family at the Johnson-Danielson Funeral Home, 1100 N. Michigan St., Plymouth, from 4 to7p.m.on Thursday April 15, 2010, where a rosary will be prayed at 7:00 pm
Father William Kummer, pastor of St. Michael Roman Catholic Church, 611 North Center Street Plymouth, Indiana, of which he was a member, will officiate at the Mass of Christian Burial in the church on Friday April 16, 2010 at 11:00 a.m.
Burial will be in the New Oakhill Cemetery, Plymouth, Indiana with full military rites by conducted by the Plymouth American Legion and Plymouth VFW.
Memorial gifts in Ambrose’s memory may be made to the American Cancer Society. 601 West Edison Road Mishawaka, Indiana 46545.