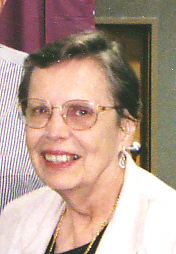 Amy Lou Schaefer, 77, of 337 Cutler St., Waterloo, Iowa, died on Thursday, March 16, 2006, at 6:30 a.m. in Saint Joseph Regional Medical Center, South Bend. Amy Lou was a lifetime Iowan.
Born in Waterloo, Iowa, on January 1, 1929, Amy Lou was the daughter of Donald and Eva M. Sullivan Moss.
She graduated from East High School in Waterloo with the class of 1948.
On September 29, 1949, in Waterloo, Amy Lou and Leroy C. Schaefer were married. Leroy died on May 26, 2003.
A legal secretary, Amy Lou served on the Braille for Iowa Commission for the Blind. She enjoyed exploring the computer world and was also active in the Waterloo Mothers’ Chorus and played piano in her church, the Church of God in Waterloo.
Amy Lou is survived by a son, Stanley C. Schaefer, Denver Colorado, and a daughter, Annette K. and Steve Osborn, Culver, Indiana, with whom she had recently made her home. Grandchildren include; Allen (Mollie) Osborn of Lafayette, Indiana and Emily Osborn of Culver.
A brother, Leon and Avonelle Moss of Madrid, Iowa, also survives.
She also leaves behind her beloved dog, Teeko.
Amy Lou was preceded in death by her parents and her spouse.
A memorial service will be held in Plymouth on Sunday March 26th at 2 p.m. in the North Salem Church of God, located on North Michigan Road.
Burial will be in the Garden of Memories, Waterloo, Iowa.
Memorial gifts in Amy Lou’s memory may be given to American Lung Association.