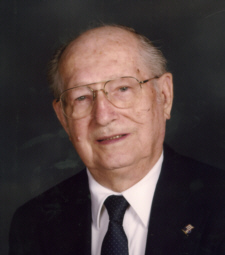 Andrew Barno, 1687 N. Michigan St., Plymouth, died of natural causes at 12:15 p.m. on Monday, June 29, 2009, in Miller’s Merry Manor, Plymouth. He was 90 years old.
Andrew was born on July 17, 1918, in Jefferson, PA. He was the son of John and Susie Guba Barno.
A Sergeant in the United States Air Force, Andrew served from August 1939, until September 1945.
On May 22, 1948, he and Elsa Hosel were married. Elsa died in March of 1996.
Andrew worked as a paper Cutter for 30 years at Detroit Tullar Envelope Co. He then worked as a custodian at Lincoln Jr. High School in Plymouth. Andrew is survived by a son and daughter-in-law, Kenneth and Joan Barno of Muskegon, Mich.
He is survived by a brother, Charles and Doris Barno, of Pennsylvania. Four grandchildren also survive. They are: Brian Barno, Alaska: Sharon Barno, Denver, Co.: Sheryl Barno, Plymouth and Burton Barno of Grand Rapids, Mich. Andrew is also survived by eight great grandchildren and numerous nieces and nephews.
He was preceded in death by his parents, his wife, six sisters and three brothers.
Visitation with the family will be from 5 to 8 p.m. on Thursday, July 2, 2009, in the Calvary Lutheran Church, 1314 N. Michigan St., Plymouth, where Andrew was a member.
Funeral services for Andrew will be at 10 a.m. on Friday, July 3, 2009, in the church.
The Rev. Steven Resner will officiate.
Burial will be in the Glen Eden Memorial Park in Lavonia, Michigan
Memorial gifts may be made in Andrew’s memory to the Calvary Lutheran Church.