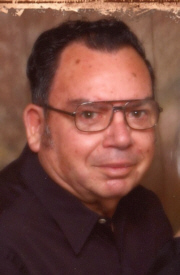 Andrew Mora Jr., 77, passed away in his home in Thursday evening December 17, 2015.
Andrew was born in Kerns, Texas on December 15, 1938 to Andrew Sr. and Mamie (Vera) Mora.
In LaPaz, Indiana on April 14, 1961, Andrew married the former Elaine M. Dietl. To this union four children were born: Michael, Jeffery, Andrea and Martin.
Andy began working for Del Monte Foods, Inc., in Plymouth when he was 18. He wore many hats in that company from shoveling coal to being the mixer for the Hawaiian Punch. He would retire in 1998. His dad and he also worked many a summers as share-croppers and migrant workers for many local farms.
He loved to tinker around with cars in his younger years, making Elaine join in as well and use her small hands to get into the tight spaces. His gift and knowledge of mechanics would be passed down to his children. Andy was involved in archery and bowling leagues, earning many trophies. He loved family together’ s for the holidays.
Elaine treasures most the many travels and camping trips they would take together in the Wichita Mountains in Oklahoma.
He leaves behind his wife of 54 years, Elaine of Argos, and their children: Mike L. of Culver, Jeffery A. of Culver, Andrea A. (Jody) Wakley of Goshen and Martin A. (Tami) of Argos. Two grandchildren, Carl (Chelsea) Berg of Plymouth and Brian Mora of Inwood, and his sister, Aurora “Rody” Vasquez of Donie , TX, also survive.
Andy was preceded in death by his parents, great-grandson, C.J. Berg and sister, Adalaid Mora.
Visitation will be from 11 to noon on Monday, December 21, 2015 in the Johnson-Danielson Funeral Home, 1100 N. Michigan Street, Plymouth. Funeral services will immediately follow at 12 p.m. in the funeral home with Pastor Don Meyers, Church of the Nazarene, officiating. Burial will be in the New Oakhill Cemetery in Plymouth.