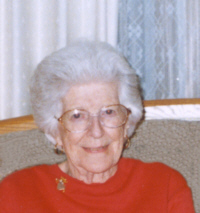 Ann Montgomery, formerly of 805 Baker St., Plymouth, died of natural causes at 7:00 a.m on Sunday, March 20, 2005. She was 88 years old.
One of her finest attributes to all who knew her was that she was a very good and loving mother to her three children.
Ann was born in Philadelphia, Penn., on August 27, 1916. She was the daughter of John O’Connor and Agnes O’Connor Murphy. She graduated from a Philadelphia high school.
In November of 1940, Ann and Richard James Montgomery were married in Philadelphia.
She worked as a clerk and office worker in Sears and Roebuck.
She enjoyed line dancing, knitting afghans and playing cards. She loved to feed the wild birds and she took care of feeding Ritz crackers to her daughter Mary’s dog, Poncho.
A strong faithed Catholic she rarely missed attending Mass at St. Michael’s Roman Catholic Church were she was a devoted member.
Ann is survived by two daughters and sons-in-law, Mary and Joe Stein, Argos, and Margaret and Edwin Kuehale, Bensalem, Penn. A son Richard J. Montgomery, Plymouth, survives as well.
One sister, Tam O. Lake of Oreland, Penn., also survives Ann’s death.
She was preceded in death by her parents and her husband.
A Mass of Christian Burial will be held for Ann at 10 a.m. on Wednesday, March 23, 2005, at St. Michael’s Roman Catholic Church, 611 N. Center St., Plymouth, Ind. The Rev. Father William Kummer will officiate.
Burial will be in New Oakhill Cemetery, Plymouth, Ind.
Memorials in Ann’s memory may be made to St. Michael’s Church, 612 N. Walnut St. Plymouth, Indiana 46563.