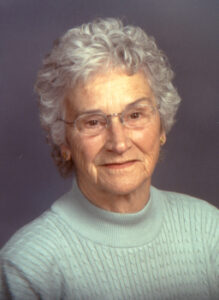 Anna B. (Fulton) McKee, 89, a resident of Shalley Drive, Plymouth, passed away at 8:55 a.m. on Friday, August 30, 2013 in Miller’s Merry Manor, Plymouth following a recent diagnosis of cancer.
Ann was born on December 22, 1923 in Knox, Indiana the daughter of John and Anna (Foltin) Fulton. She graduated from Knox High School in 1941.
She began her working career on the family farm, with long hard hours alongside her three sisters. During the war years she worked at the Kingsbury Ordinance Plant. After moving to Plymouth she took a job with the City of Plymouth Water Works and later, a position for many years as executive secretary with the McCord Corporation and retired in 1989. Ann carried a strong work ethic throughout her life, often helping in the plant during ‘strike’ periods to keep orders going out the door. She ran her home in the very same meticulous fashion but always with a pleasant smile and inviting demeanor to all she came in contact with.
Ann remained active in her retirement years maintaining her home and gardens’, taking long walks, lunches with her close group of friends and worship at her church the Immanuel Lutheran in Donaldson. She enjoyed traveling that included Hawaii, Germany, Central America and Arizona. A loyal Cub fan and that of Plymouth basketball and football, she rarely missed a home game.
Over the years Ann held many offices as a member of the Women of the Moose – Plymouth Chapter 1355. An avid bowler, Ann had many enjoyable times while active with Women’s League Bowling.
Ann was preceded in death by her spouse of nearly 47 years, Charles B. McKee. They were married in Plymouth on September 3, 1944. Together they had one son, now Master Trooper, Charles R. “Chip” McKee, Indiana State Police who with his wife Susan reside in Terre Haute, Indiana. Also surviving is a grandson, Sean P. McKee of Indianapolis, a dear sister, Christine E. Fulton of Cumming, Georgia, and nephews, Eugene “Timer” Milner and Bob Owens both of Hamlet, Indiana.
Two sisters, Eleanor M. Hess and Lillie J. Milner have also preceded in death along with one niece, Carolyn Owens.
Ann found comfort in her family and many close friends, especially Maggie and Rhonda.
Visitation will be held on Tuesday, September 3rd from 4 – 8 p.m. in the Johnson-Danielson Funeral Home, 1100 N. Michigan St., Plymouth.
A Women of the Moose memorial rite will be held Tuesday evening at 7:30 p.m. in the funeral home.
Services will be held on Wednesday, September 4th at 11 a.m. in the Plymouth Brethren Church, 1130 N. Michigan St. Plymouth where calling will continue after 10 a.m. until time of services. The Rev. Dennis Wenzel, pastor of the Immanuel Lutheran Church, will officiate.
Burial will follow in the New Oakhill Cemetery, Plymouth after which a funeral luncheon will be held at the Plymouth Moose Family Center, 1225 W. Jefferson St. Plymouth. Memorial gifts may be given to the Immanuel Lutheran Church, 6835 Union Road, Plymouth, IN 46563