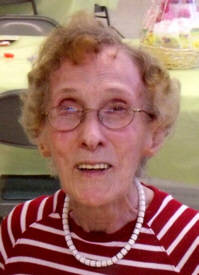 Anna B. Schroeder, 82, formerly of Olive Rd in Plymouth, passed away on Saturday evening, December 27, 2014 at the St. Joseph Regional Medical Center, Plymouth.
Born on August 25, 1932 in Plymouth, Indiana, Anna was one of two daughters born to Frank B. and Inez E. (Heckaman) Thomas. She graduated from LaPaz High School with the class of 1949.
On November 25, 1981, in Plymouth, Anna and Harlan D. “Ambrose” Schroeder were married. He would precede her in death on May 3, 2003.
Anna worked as a kitchen aide in the dietary department at Miller’s Merry Manor in Plymouth and at the St. Joseph Regional Medical Center, Plymouth, until her retirement.
Anna was a hard working woman and was always full of energy. She loved her family, cooking many meals and baking goodies for them constantly, and adored watching her grandchildren and great-grandchildren. She also liked to read.
Anna is survived by her daughter: Lynn C. Schaefer of Plymouth. Three grandchildren: John and Tracy Williams; Tim and Kelli Stump and Sarah Stump, all of Plymouth, survive, together with five great-grandchildren: Jonathon, Jordyn, Jacob and Sydney Williams, and Chelsea Stump.
She was preceded in death by her parents, husband Ambrose, daughter Valerie Schaefer-Scuillo on September 21, 2013, and sister Virginia Ritenour.
Visitation will be from 4 – 7 p.m. on Tuesday, December 30, 2014 in the Johnson-Danielson Funeral Home, 1100 N. Michigan Street, Plymouth.
Funeral services will be at 11 a.m. on Wednesday, December 31, 2014 in the Johnson-Danielson Funeral Home with Rev. Charles Krieg officiating.
Burial will be in the Fairmont Cemetery.
Memorial contributions can be made to Laville Elementary School 12645 Tyler Road, Lakeville, IN 46536.