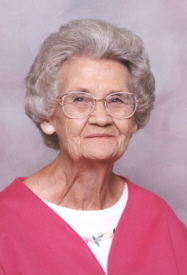 Anna C. Blanchard, 88, passed away at the Cook Lake home of her daughter, on Saturday, January 30, 2010, at 1:05 a.m. of natural causes. Formerly of Hammond, Indiana she has made Plymouth her home for the past fourteen years and has resided for the past year in the comfort and care of the Catherine Kasper Life Center at Donaldson with her many friends.
Anna was born in Elmo, Missouri on October 22, 1921, the daughter of John Westley and Sarah Elizabeth (Littlepage) Cauhorn.
On October 14, 1939, in Missouri, she became the bride of Fairl F. Blanchard. He preceded her in death on July 3, 1985.
She was an attending member of the Community Church of God – LaPaz. Her love for her Savior Jesus was foremost in the nurturing life she led. A favorite past-time was fishing.
Anna was a homemaker and proud mother of three daughters. They are; Ella Elizabeth (Robert) Cobb of New Port Richey, Florida, Carolyn Ann (Jerry)Wall of Plymouth and Darlene Regina (Michael) Terbrak of Cobden, Illinois.
Her grandchildren include; Dwane Wall of Knox, Jerry Dean Wall of Milford and Robert Cobb Jr. of Valparaiso along with six great-grandchildren. A sister; Ruby Atherton of Jackson, Missouri also survives.
She was preceded in death by two brothers and five sisters.
The family will receive friends at the Johnson-Danielson Funeral Home on Monday, February 1st from 5 – 8 p.m.
A graveside service will be held on Wednesday, February 3rd at 10:30 a.m. CDT in the Anna City Cemetery, Anna, Illinois. The Rev. Allen Speer of the First Baptist Church, Cobden, Illinois will officiate.
Memorial gifts may be made to the Center for Hospice and Palliative Care, 112 S. Center St., Plymouth, Indiana 46563