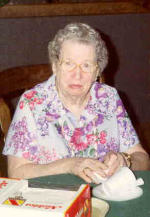 Anna D. Martin, 90, a longtime resident of W. Washington St., Plymouth, living in Miller’s Merry Manor for the past nine years, died there of natural causes at 7:30 p.m. on Thursday, Nov. 22, 1901. Born the daughter of Charles “J.C.” and Ella Reimers Dahlke in Ellicottville, New York, on May 12, 1911, Anna was educated in Ellicottville schools. She lived in New Carlisle, Ind., prior to moving to Plymouth in 1948. On April 12, 1930, Anna and Charles F. Martin were married in Rochester, Ind. Charles died on Dec. 15, 1975. A Licensed Practical Nurse, Anna formerly held a position with the Mayflower Nursing Home and did private duty home-care. Anna’s grandchildren and her church, the Blissville Church of the Brethren, of which she was a member for over 40 years, were of great importance to her. She is survived by a daughter-in-law, Marjorie M. Martin of Plymouth, seven grandchildren, 29 great and 27 great-great grandchildren. The grandchildren are: Ehler and Barbara Martin, Rochester; Alan and Donna Martin and Charles and Diane Martin, all of Argos; Tony Martin, Elkhart; John and Brenda Martin, Rogers, Ark.; Bruce Martin and friend Mary Ellen, Baldwinsville, N.Y.; and Kathy and Al Schaeffner, Macy, Ind. Two sisters, Ella Robbins, Alexander, N.Y., and Ruth Casella, Salamanca, N.Y., also survive. Anna was preceded in death by, her husband, two sons, John W. and Charles W. Martin, three sisters and five brothers. Four grandchildren have also died. Visitation will be in the Johnson-Danielson Funeral Home, 1100 N. Michigan St., Plymouth, on Saturday, Nov. 24, 2001, from noon to 2 p.m. Funeral services will follow visitation at 2 p.m. in the funeral home. The Rev. Paul McBride, former pastor of the Blissville Church of the Brethren, will officiate. Burial will be in New Oakhill Cemetery, Plymouth. Memorial gifts in Anna’s memory may be made to the Blissville Church of the Brethren.