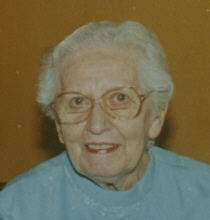 Anna F. “Ann” Birkner, 91, a resident of Plymouth, 10251 King Rd., since 1976, coming from Smith Center Kansas, and also having lived in Antioch and Lake Forest, Illinois, died of natural causes at 5:20 a.m. on Thursday, January 12, 2006, in Saint Joseph Regional Medical Center, Plymouth.
Born in Cedar, Kansas, on September 16, 1914, Ann was the daughter of Christian and Lucinda Klinsman Kuhlmann. She attended Kansas public schools.
On August 24, 1936, in Gaylord, Kansas, Ann and Fred A. Birkner were married. Fred died on September 7, 1997.
A homemaker, Ann enjoyed not only cooking, but collecting a variety of recipes. She was an expert gardener and also raised fine, healthy house plants.
Ann was confirmed in the Lutheran faith.
Ann is survived by a son and daughter-in-law, William H. and Donna Birkner of Norton, Ohio and by two grandsons and two granddaughters and their spouses. They are: Mike and Perri Birkner, Elgin, Illinois: Jeff and Teresa Birkner, Norton, Ohio; Cyndi and David Benhart, Rock Falls, Illinois and Christa Birkner, Norton, Ohio.
Four great-grandchildren also survive. They are David Birkner and Justin Birkner, both of Elgin, Illinois; and Danielle Benhart and Deena Benhart, both of Rock Falls, Illinois. Numerous nieces and nephews also survive.
She was preceded in death by her parents, her husband, son Douglas Birkner and ten brothers and sisters.
Friends will be welcomed to come and celebrate the long and fruitful life of Ann Birkner from noon to 2 p.m. on Saturday, January 14, 2006, in the Johnson-Danielson Funeral Home, 1100 N. Michigan St., Plymouth.
Funeral services for Ann will be held at 2 p.m., following visitation, in the funeral home. The Rev. Steven Resner, pastor of the Calvary Lutheran Church of Plymouth, will officiate.
Burial will be in New Oakhill Cemetery, Plymouth.
Memorial gifts in Ann’s memory may be made to the National Multiple Sclerosis Society, 7301 Georgetown Road #112, Indianapolis, Indiana 46368