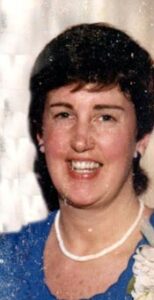 Anna Mae Kaurich, 70, passed away after bravely batting cancer with a strong will, courage and dignity, on Monday morning June 22, 2015 in her home with her loving husband by her side.
Anna was born in Gary, Indiana on December 22, 1944 to Stephen Joseph and Mae (Collins) Kukoy. She graduated from Gary Lew Wallace High School with the class of 1962. William R. “Bill” Kaurich took Anna to be his wife on August 29, 1964 at Grace Methodist in Glen Park, Indiana. The couple moved to Merriville, Indiana in 1966 and most recently settled in LaPaz, Indiana in 2007. The couple shared 50 wonderful years of marriage together. Anna worked at L.S. Ayres as a sales associate and for Lake County Library. She loved to travel and enjoyed being in nature, taking many walks along Lake Michigan with her husband, Bill. Anna was a beloved mother and grandmother, and she treasured fun times and memories made with her family. Anna is survived by her loving husband Bill, her two sons Kelley (Jeanine) Kaurich of Cicero, Indiana and Kevin (Jennifer) Kaurich of South Bend, Indiana, her brother Steve (Sandy) Kukoy of Evergreen, Colorado and her grandchildren: Cayman Kaurich, Colin Kaurich, Jessica Kaurich, Quinn Kaurich and Connor Kaurich. She was preceded in death by her parents. Private family services will take place.
Memorial contributions can be made to American Cancer Association, PO Box 22718 Oklahoma City, Oklahoma, 73123-1718