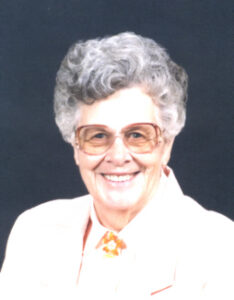 Annabel Long, 95, a lifelong Marshall County resident, formerly of Plymouth, passed away on Tuesday, November 13, 2012 in the Lakeland Regional Medical Center from complications due to a fall. Annabel, who had resided at the Lake of the Woods for over 30 years moved to Lakeland to live with her daughter Joan in June of 2011.
Annabel was born to Galeman and Myrtle E. (Kitch) Dexter on January 26, 1917 in Bourbon, Indiana. She was a 1935 graduate of Plymouth High School where she was an all-around good athlete. She especially enjoyed swimming, dancing and tennis.
As a devoted Christian, Annabel centered her life around her church, the Plymouth Wesleyan for over 65 years and as a ministry she studied and shared the prophesies of the Bible with her family and others. At church she was greatly involved with Children’s Church and Bible School before taking on the duties of Secretary/Treasurer. A highlight of her life was having been able to follow the steps of Christ in a trip the Holy Land.
Annabel married her spouse of 64 years, Leal J. Long on April 4, 1936; he preceded her in death on November 24, 2000.
They were the parents of five children, Air Force Captain Robert “Bob” Long who lost his life in combat in Vietnam, Betty A. (Jerry) Hummel of Bremen, Joan L. Klingerman and dear friend Chuck of Lakeland, Florida, Diane R. (John) Johnson of Eaton Rapids, Michigan and Cynthia Anne Long (deceased). Also surviving are 15 grandchildren: Philip (Darla) Kiefer, Laurel (Armando) Salazar, Karen (Jerry) Smith, David (Nora) Kiefer, Troy Klingerman, Brett Klingerman, Traci (Michael) McGlynn, Kellen (Jerry) Ambrose, Tim Johnson, Tom Johnson, Ted Johnson, Rick Johnson, Tamara (Derek) Jones, Randy Johnson, Kristel (Tim) Houin and Gary Hummel. Forty-three great grandchildren and 18 great-grandchildren also survive as well as two sisters; Ruth Beals of Plymouth and Grace Harris of Wheatridge, CO and many nieces and nephews.
Others who are predeceased include; son-in-law Larry Klingerman, sister Eudora Bennett, brother Galeman Dexter Jr. and step-granddaughter Lori Kulczar.
There was always joy and laughter in Annabel’s family and at any given opportunity, she enjoyed sharing home movies and slides while entertaining at their lake home.
A time of remembering will be held on Sunday, November 18, 2012 from 1 – 4 p.m. in the Johnson-Danielson Funeral Home, 1100 N. Michigan St. Plymouth. Funeral services will immediately follow at 4 p.m. in the funeral home with Rev. John Branch officiating.
Memorial gifts may be given to the Plymouth Wesleyan Church – Building Fund, 11203 S. Michigan St., Plymouth, IN 46563.