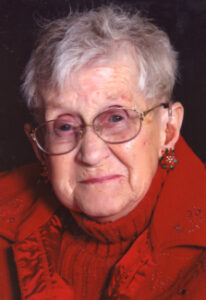 A Tyner Indiana resident since she was 19 years-old, Annabelle H. Miller, 94, passed away unexpectedly of natural causes in Memorial Hospital, South Bend, at 8:55 p.m., on Wednesday, June 19, 2013.
A Godly woman who always wore a smile, she loved her family and knew all of her grandchildren’s names. Interested in the wonders of life and all things around her, she read the newspaper daily.
Annabelle, the daughter of Albert M. and Josephine M. (Campbell) Drake, she was born in North Liberty, IN. on February 27, 1919 and was one of nine children.
She attended grammar schools in Teegarden and Argos before attending Tyner High School.
On November 15, 1941, in Plymouth, Annabelle and Max Edward Miller were married. Max passed away on April 9, 1980.
Prior to her marriage, Annabelle was a nanny. As a homemaker, she loved gardening and farming with her husband, raising chickens, cows and pigs as well as flowers and vegetables.
She was known among her family and friends as superb pie maker, especially cherry, always making her pie crusts with lard. It was hard to compete with her fried chicken. A member of the Tyner United Methodist Church for the past 14 years, she volunteered with her baked goods for social gatherings and fund raisers.
Annabelle is survived by her four sons and two daughters, eight grandchildren and fifteen great-grandchildren.
They are: Rosalie A. Morrison, of Tyner. Fred L. (Patti) Miller, of Tyner, and their children:Gail L Miller and Donald R. (Rebecca) Jones. Marcia K. (Norman) Robbins, of Plymouth, and their children: Matthew L. (Stephanie) Robbins and Traci R. (Craig) Lenig. Roger D. (Carolyn) Miller, of Grovertown, IN. and their children: Roger D. (Windie) Miller: Deana M. (Tim) Wright: Denise L. (Ryan) Sieber and Daniel B. (Melissa) Miller. Gary L. Miller of Plymouth and Dennis G. Miller of Walkerton. Fifteen great-grandchildren with one on the way, complete her family.
A sister-in-law, Beatrice Drake of Walkerton and numerous nieces and nephews survive as well.
Annabelle was preceded in death by her parents, her spouse, a son-in-law, Roy L. Morrison and eight siblings including sisters: Marie Hillman, Blanche Welch, Lola Pavey and Evelyn Davis and brothers John Drake, Albertus Drake, Roy Drake and Keith Drake.
Visitation will be held on Sunday, June 23, 2013, from 2 to 6 p.m. in the Johnson-Danielson Funeral Home, 1100 N. Michigan St., Plymouth.
Funeral services for Annabelle will be at 11 a.m. on Monday, June 24, 2013, in the Tyner United Methodist Church. The Rev. Tamara Boggs, pastor of the church, will officiate.
Interment will be in the Tyner Cemetery.
Memorial donations may be made to the Walkerton Food Pantry or the Tyner United Methodist Church in Annabelle’s memory.