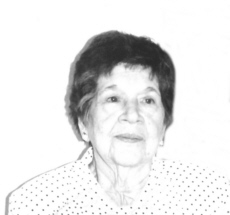 Annabelle (Harbaugh) Youngman, 86,of Elkhart passed away at home on Sunday November 25, 2007 at 1:15 p.m.. She was born on July 26, 1921 in Plymouth, Indiana to William and Bessie (Bottorff) Harbaugh. She married Gerald Youngman of Plymouth, on February 8, 1940. He died in Elkhart on February 6, 1978. She is survived by two daughters, Patricia Tague, and Deborah Davis, both of Elkhart; one son, Charles (Karen) Youngman; and one step son, Gerald (Penny) Youngman, both of Goshen; one step sister, Bonnie Bope of Plymouth: three sister-in-laws, Helen Harbaugh of Elkhart, Lou Gordon of Bremen and Anna Ruth Hall of Plymouth; 12 grandchildren; 26 great grandchildren; and 4 great grandchildren.
She was preceded in death by one grandson, Craig Davis; seven brothers, Ralph, Ted, Willard, Howard, Bill, Gene, and George; and two sisters, Ruby and Jenny.
Annabelle was a homemaker and a member of the Elkhart Valley Church of the Brethren in Elkhart, Indiana. She was a past president of the VFW Auxiliary Post 106 and a member of the Women’s Auxiliary VFW Post 985.
Annabelle’s family invites family and friends to share memories and celebrate her life from 4 to 8 p.m. on Tuesday November 27, 2007 in the Johnson-Danielson Funeral Home, 1100 North Michigan Street Plymouth, Indiana. Funeral Services for Annabelle will be held at 2:00 pm on Wednesday November 28, 2007 in the funeral home with Pastor Beth Sollenberger of Elkhart Valley Church of the Brethren officiating.
Burial will follow in the New Oakhill Cemetery, Plymouth, Indiana.
In lieu of flowers, memorials may be given to Elkhart Valley Church of the Brethern, 24955 CR24, Elkhart, Indiana 46517.
Expressions of sympathy may be sent to the family via the funeral home website; www.johnson-danielson.com