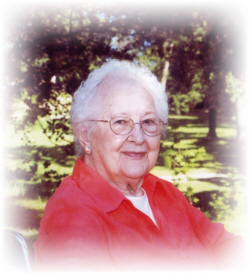 Anne Irene (Pertics) McCollough, died in the Emergency Room at South Bend Memorial Hospital due to an accidental fire at her residence on U.S. 31 North of LaPaz, at 4:50 p.m. on Tuesday, Sept. 7, 2010.
Anne, 91, was born in Stillwell, Ind. on September 19, 1918. She was the daughter of Elias P. and Sophia F. (Paidle) Pertics. She graduated from LaPaz High School with the class of 1937.
On July 8, 1939, Anne and Clyde C. McCollough were married in LaPaz.
Married for almost 60 years, Clyde died on January 30, 1999.
During their time together, Clyde and Anne started McCollough Real Estate in 1978. Anne, a homemaker, was receptionist for the business.
Anne enjoyed flower gardening and family gatherings. She was remembered for making blueberry pies for any sick member of her family.
She had been involved in the LaPaz P.T.A., the Lions Club, and as a band booster. The couple loved attending the school basketball games and following the coaching of their son David.
Anne’s grandchildren and great-grandchildren had special places in her heart and she was interested and involved in their many activities.
She is survived by four daughters and three sons. Her daughters are: Patricia A. Flowers, South Bend: Jane L. Schweisberger, Bremen: Judy E. (Ed) Keil, LaGrange and Kathy J. (Mike) Spurling, Rolling Prairie.
Her sons are Terry C. McCollough, LaPaz: Larry O. (Ruth) McCollough, Plymouth: and David D. (Brenda) McCollough, Noblesville.
Her grandchildren are: Blaine Schweisberger, Lynn Schweisberger, Ed Keil, Chris Keil, Jennifer (Keil) Warrener, Quinn (McCollough) Selner, Michelle Waymouth, Barb Campbell, Nikki Spurling, Eric Spurling, Kelsey (McCollough) Daubenmier, Kirk McCollough, Kiley McCollough, Kaden McCollough, Keith Flowers, 14 great grandchildren and one great-great grandchild.
Many nieces and nephews survive as well.
Anne was preceded in death by her husband, Clyde, her parents and two brothers, Emil E. Pertics and Ernest R. Pertics. Also preceding her were, Gene Flowers, a son in law, and Angela Wenino McCollough, a daughter-in-law.
Friends are invited to share memories and celebrate the life of Anne on Friday, Sept. 10, 2010, from 3 to 8 p.m .(EST) at the Johnson-Danielson Funeral Home, 1100 N. Michigan St., Plymouth.
Funeral services for Anne will be held at 11 a.m.(EST) on Saturday, Sept. 11, 2010, in the funeral home. Father Cornelius J. Ryan, CSC of Little Flower Catholic Church, South Bend, Ind. will officiate.
Burial will be in the New Oakhill Cemetery, Plymouth.
In lieu of flowers, the family requests that memorials in Anne’s name be made to the LaPaz Fire/EMS P.O. Box 369, LaPaz, Indiana 46537 or Center for Hospice Care 112 S. Center Street, Plymouth, Indiana 46563.