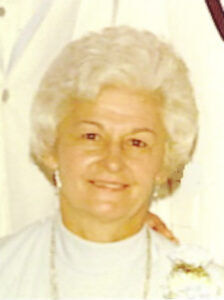 Longtime Highland resident Anne Mathew died on Saturday following a brief illness.
Anne was born in Gary, Indiana and was raised in Thayer, Indiana. She graduated from Mt. Ayr High School and Central Normal Teacher’s College in 1946. Anne obtained her Masters Degree from Indiana University in 1967. Her teaching career spanned 40 years, in which she taught physical education, typing, and various business classes. Anne’s early career was spent teaching in Lapel, Wheatfield, and Morocco Indiana. In 1959 she moved to Highland High School, Highland Indiana where she taught for 24 years, retiring in 1983. She loved working with her students and in her career founded the Highland “Lettergirls”, sponsored G.A.A., Cheerleaders, and the Business Club.
She married her husband Delos “Doc” Mathew on August 2, 1953. They remained together 43 years until his passing on September 2, 1996. Anne is survived by a loving family: Her daughter, Christine A. and her husband Robert Pickell of Plymouth Indiana and their two sons, Ryan M. and Jason R. Pickell. Her son, Michael D. Mathew of Fishers Indiana and his two daughters, Ashley E. and Amber S. Mathew, and her great-granddaughter, Brooklyn Cheseman (Ashley).
She is also survived by her sister, Irene Luhr, long-time Highland resident now residing with her children in Minnesota; as well as Doris Yacuk (Nick), her sister-in-law previously of Thayer Indiana, now residing in Bremen Indiana; her brother and sister-in-law Delbert and Lollie Mathew previously of Mt Ayr Indiana, now residing in Florida; and her sister-in-law. Jeanette Potts (Delos) of St. Joseph Michigan and numerous loving nieces and nephews.
Anne was also preceded in death by her twin sister, Helen Brunton-Klemchuk, her brothers, Alex and Nick Yacuk, and her sister, Sophie Heim. As well as in her early life, siblings, Catherine, Olga, Peter, and Paul Yacuk.
Visitation will be held on Tuesday, February 12, 2008, from 4 – 8:00 PM CST, at Fagen-Miller Funeral Home, 2828 Highway Avenue, Highland Indiana.
Funeral Service will be on Wednesday, February 13, 2008 at 10:00 CST, with visitation one half-hour prior to the service. The service will be held at St. Augustine Catholic Church, 318 N. McKinley Ave, Rensselaer Indiana. She will be buried along side her husband at Memory Gardens of Rensselaer Indiana.
Memorial contributions may be made to the Alzheimer’s Foundation or the donor’s choice.