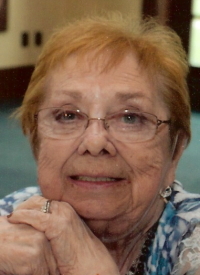 Anne Patricia Karwatka, 84, of Plymouth joined Ted in Heaven on February 6, 2020. She was born and raised in Chicago, Illionis by William and Irene (Kosieracki) O’Meara. Shortly after she was joined by her brother, Lawrence O’Meara. She married Thaddeus Karwatka on May 7, 1955. That union brought forth two daughters, Kathleen and Susan. The family moved to Plymouth, IN in July of 1974. Anne worked at JCPenney in Plymouth, and then at the Division of Family Services. Anne was on the Girl Scout Council and enjoyed her time volunteering with the girl scouts. She was the family caretaker, taking care of her parents until the end. She always enjoyed her farm. Lovingly named “The Farm” they would host family wood cutting parties and family dinners. Anne held Christmas time especially close. Of all the things she enjoyed, the greatest was her three grandchildren.
Anne is survived by her daughters Kathleen (Rod) Kemper of Longmont, CO, and Susan (Leonard) Asel of South Bend, IN; grandchildren Lauren (Robert Mims) Fry, Thaddeus (Katherine) Asel, and Matthew Asel; and several cousins, nieces and nephews.
Preceding her in death are her parents, Irene and William; her husband Thaddeus “Ted” Karwatka; and her brother Lawrence “Larry” O’Meara, who was killed in Vietnam. Anne enjoyed her animals, especially her dogs and cats. Because of this the family asks for memorial donations to Michiana Humane Society, 722 Indiana Highway 212, Michigan City, IN 46360. Visitation will be held on Friday, February 14, 2020 from 4 – 7 p.m. at the Johnson-Danielson Funeral Home 1100 N. Michigan St. Plymouth. A Rosary will be recited at 7 p.m. Mass of Christian Burial will be on Saturday February 15, 2020 at 11 a.m. at St. Michael Catholic Church with Fr. John Korcsmar CSC., 613 N. Center St. Plymouth. Visitation will be held from 10:00 a.m. until the start of mass.