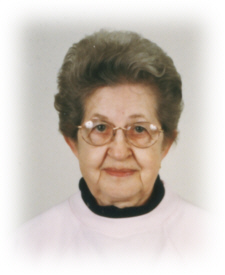 Longtime Plymouth resident, Arlene ‘Liz’ Hartman, 89, passed away at home, in the company and care of her family at 9:33 a.m., Friday, June 26, 2009.
She was born the daughter of Glenn D. and Anna Glee Billhimer on February 3, 1920 in Gas City, Indiana. Liz was a member of the 1938 graduating class of Green Township High School in St. Joseph County.
On January 9, 1949, in Plymouth, she married Willis E. Hartman, he would precede her in death on February 6, 1992.
Liz was a homemaker and along with raising her three children she was an expert grower of African Violets and a member of the Plymouth Club. She was also a former member of the First Christian Church in Plymouth. Liz and Willis were collectors of fine glass and were members of the National Toothpick Holders Society. Later Liz acquired a large number of Boyd’s Bears.
Her children include; a daughter, Marlene A. Harrison of Plymouth, and two sons; Ronald L. Whickcar of Koontz Lake and Clay E. Hartman of Daytona Beach, Florida along with four grandchildren; Dan Rader, Melissa Kreitzer, Steven Whickcar and Kelli Reichel. Nine great grandchildren also survive.
She is also survived by a brother; Milford (Mary) Billhimer of South Bend and two sisters; Wilma Doll and Betty (Richard) Uceny both of Plymouth and several nieces and nephews.
The family will receive friends on Sunday June 28th from 2 – 5 p.m. in the Johnson-Danielson Funeral Home, 1100 N. Michigan St. Plymouth where services will be held on Monday at 11 a.m. with the Rev. Charles Krieg officiating.
Burial will follow in the New Oakhill Cemetery. Memorial gifts may be made in Liz’s memory to the research departments of Parkinson, Cancer or Arthritis Foundations.