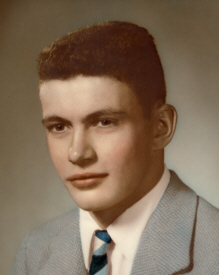 U. S. Army veteran, Arlis Elvin Eads, passed away on Memorial Day following an extended illness. Arlis, age 71, died at 4:15 p.m. on Monday, May 31, 2010 in the company and care of his family and supportive care of the Center for Hospice and Palliative Care volunteers.
Arlis was born in Grovertown on April 11, 1939, the son of Elvin Wesley Eads and Sylvia Irene (Reinholt) Eads – Skoog and was a lifelong Plymouth area resident but for three years spent in Arizona after retiring from a 38 year career with NIPSCO as a substation electrician. While working he was a member of the United Steelworks Union – S.O.A.R.
A 1957 graduate of Plymouth’s Lincoln High School, Arlis continued with electrical training and certification in many areas of the utilities service.
From 1957 – 1959 he served in the United States Army and was a member of the Plymouth American Legion Post #27.
On November 4th, 1960, in Plymouth, he took as his bride the former Dorothy Elaine Gardner this marking their 50th year of commitment to each other.
Possessing a deep respect for nature, Arlis was a true outdoorsman at work and play. His true passions included traveling in the mountainous West and Southwest to engage in activities related to hunting with his friends and son, appreciating the beauty of nature, and collecting Native American relics and artifacts with Dorothy. In addition to traveling with Dorothy in their fifth wheel, Arlis enjoyed landscaping and creating beautiful gardens and taking time for his grandchildren’s activities. Being resourceful and mechanically innovative, he was able to improvise repair of anything deemed “broken”. Those who knew Arlis well, know of his profound love and respect for nature and compassion for those without a voice, especially animals and those who are less fortunate. He is survived by his devoted spouse Dorothy, two daughters, a son and their families. They are: Kimberly D. and Craig Jones and children, Madison and Taylor all of London, Ontario Canada. Daughter, Melissa S. and Steven DeFord of Plymouth and children Brandii and Levi Wilson with great-granddaughter, Libby of South Bend and Ryan DeFord of Norwalk, Conn. His son Marc E. Eads, also resides in Plymouth.
Also surviving is a brother, Eugene and Linda Eads of Henderson, Nevada and sister, Vickie and Kim Finkenbiner of North Webster, Indiana along with several nieces and nephews.
He was preceded in death by his parents and three sisters: Cindy Zimmerman, Wilma Birk and Connie Gardner.
The family will receive friends on Thursday June 3rd from 4 – 8 p.m. in the Johnson-Danielson Funeral Home, 1100 N. Michigan Street, Plymouth where services will be held on Friday June 4th at 11 a.m. The Rev. Tom Padberg, a chaplain with the Center for Hospice and Palliative Care will officiate.
Burial will follow in the New Oakhill Cemetery, Plymouth with military honors provided by members of the American Legion, VFW and DAV.
Memorial gifts may be made to the Center for Hospice and Palliative Care, 112 S. Center Street, Plymouth, IN 46563