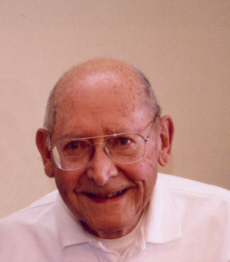 Arthur E. “Art” Thake, 85, died of natural causes at his home at 2:30 a.m. on Tuesday, January 25, 2011. Formerly of Ft. Wayne, Art and his wife June, who preceded him in death on December 30, 2010 had resided on Cedar Court in Plymouth’s Eastwood Estate.
Born in Chicago, Illinois on August 21, 1925, Art was the son of Edwin H. and Elfrieda (Mahler) Thake.
Art graduated from Steinmetz High School, Chicago, in 1943 where he had his own band playing lead trumpet. On April 19, 1947, in Chicago, Ill., Arthur married classmate and sweetheart June C. Sarney and remained devoted to each other for nearly 63 years. They enjoyed traveling especially to Hawaii. WWII would take him to the storming of the beaches at Normandy and while a soldier and paratrooper, he would earn three Purple Hearts and the Bronze Star.
Upon returning home Art completed his degree work in Mechanical Engineering at Northwestern University – Evanston. He would go on to earn a Doctorate of Science Degree from Trinity College in Dublin Ireland where he taught for a period of time.
Back in Chicago he put his musical talents to good use supplementing his income as a member of the Lawrence Welk Orchestra playing popular venues such as the Trianon Ballroom and the Drake Hotel.
His international career allowed him to travel Japan, Mexico, Egypt, Ireland, France, Italy, Switzerland and Finland.
While working for Bell and Howell in Chicago, Art was instrumental in the development of the Polaroid Land camera. He also worked for the Ritter Co. in Rochester, NY, Uhlman Optics in Schaumburg, IL, National Homes in Lafayette, IN, and then United Technologies in Huntington, where he served as general manager and vice-president for eight years, retiring in 1990.
His Faith was very important to Art as he was a longtime member of St. Paul’s Lutheran Church in Ft. Wayne and currently St. Paul’s Lutheran Church in Bremen. Art had assisted in several successful fund drives for many churches. He enjoyed reading and gardening which included raising roses. Their children and grandchildren’s activities were very important to them.
Art was preceded in death by his parents, his wife June and a brother Roger F. Thake. Surviving are three sons and two daughters. They are sons David A. Thake, Belvidere, Ill.: Dale R. (Colleen) Thake, Charleston, SC: Dan F. (Beth) Thake, Wauconda, Ill.
Daughters include Diane J. (John) Schumacher, St. Charles, Ill. and Donna D. (Mike) Gordon, Plymouth, Ind. Fifteen grandchildren, ten great-grandchildren, and a sister-in-law, Delayne Thake survives as well.
Friends are invited to share memories with Art’s family on Saturday, January 29, 2011, from Noon to 2 p.m., at the Johnson-Danielson Funeral Home, 1100 N. Michigan St., Plymouth, Ind.
Funeral services for Art will be held at 2 p.m. Saturday following visitation in the funeral home. The Rev. Neil Wonnacott will officiate.
Burial will be in the Plymouth New Oakhill Cemetery. Military honors will be accorded Art by members of the VFW, American Legion and D.A.V.
Memorial gifts may be made in Art’s name to St. Paul’s Lutheran Church, 605 S. Center St., Bremen, Indiana 46506 or Memorial Hospital, 615 N. Michigan St., South Bend, Indiana 46601.
Funeral Director – Randall L. Danielson -randy@johnson.danielson.com