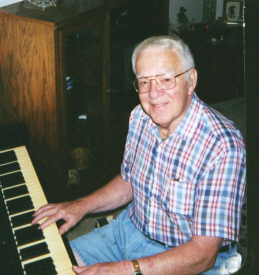 The piano keys are stilled forever.
Art Kaufman, 79, widely acknowledged to be one of Plymouth’s most gifted musicians – ever- has died.
Art died of natural causes at 2:40 a.m. on Wednesday, March 1, 2006, in the Pilgrim Manor Nursing Home, 222 Parkview St., Plymouth, where he had resided for almost two years after moving from his apartment at the Pretty View Condos at Pretty Lake.
Born in Plymouth, on July 24, 1926, he was the son of John A. and Gertrude Olive (Manuwal) Kaufman.
Art taught himself to play the piano by ear when he was 10-years-old. He later took lessons from two piano teachers in town: Marion Kaser and Lila Casterline. After four years of basic training, Marion told him she couldn’t teach him anymore than he already knew.
At 14, he auditioned for a classical music course at the Conservatory of Music in Chicago. He paid for his lessons with money he saved from working two jobs: making popcorn for Gus Gavalas’ Kewpie grill and stocking shelves at Grolich’s Grocery.
In the early 1940s –by this time, his friends had nicknamed him “Pigfoot,” from the popular tune, “Pigfoot Pete, the Boogie Woogie Man” – he was the piano man for The Three Demensions, a jazz trio made up of himself, Dick Bibler on alto sax and Jim Yeazel on bass. He also played with the Russ Steiner and Dick Derf bands.
Yeazel said, “ He was a natural. So talented. Everybody admired him in high school. He could not only play, he could sing and he was a wonderful dancer. His talents were rare and wonderful.”
He graduated from Plymouth High School with the class of 1944.
On October 30, 1944, Art enlisted in the Army. He was shipped out to France first and then to Germany where as a Staff Sgt. he became a member of Gen. George C. Patton’s Third Army 80-member Ground Force Band.
He played cymbals for parades and inspections and piano for the USOs and both officer’s and enlisted men’s clubs.
While in Heidelberg, Germany, he had the opportunity to study piano with Hans Gruber, a noted professor of piano music at the university.
When General Patton was mortally wounded in a Jeep accident, his bier lay in a Roman Catholic cathedral in the center of town. The general’s last wishes were the he wanted continuous music played over his body for as long as he was lying in state.
Sgt. Kaufman played the two-manual organ for the American hero – non-stop—from 6 p.m until midnight.
After his discharge from the Army, Art fulfilled a dream. He came back to Plymouth, drove to Indianapolis and paid cash for a brand-new piano, the first he had ever owned.
From 1950 to 1955, he lived in Oklahoma City and earned a degree from the University of Oklahoma.
He then worked in Chicago in office management until 1966, when he moved to San Francisco to work for the General Electric Company for over 22 years.
On the side, he played professionally, for weddings, house parties and in dance bands.
He came home to Plymouth in 1988.
A member of St. Michael’s Roman Catholic Church, Art was a part-time organist and sang in the choir. He taught piano and volunteered in the Holy Cross Parkview Hospital Emergency room. He was a board member of the American Cancer Society. As a pastime, when his fingers could no longer tickle the keys as they once did –he enjoyed watching sports on TV.
In an interview in 2005, Art said, “My fingers are too stiff from arthritis. I don’t want to spoil the music.
“The power of music is wonderful,” he said. “It can restore your soul – or break your heart.”
He did both with his music.
Art is survived by two sisters-in-law and a brother-in-law. They are Rosmond Kaufman, Lakeville, Ind., Pat Kaufman, and Ed Eastlund, both of Plymouth, Indiana. Several nieces and nephews survive as well.
Art was preceded in death by his parents and by four siblings: two sisters, Julia Mitchell and Marietta Eastlund and two brothers, William and Lowell Kaufman.
Friends will be welcomed to share their love and musical memories with the family from 5 to 7 p.m. on Thursday, March 2, 2006, in the Johnson-Danielson Funeral Home, 1110 N. Michigan St., Plymouth.
The Rev. Father William Kummer will celebrate a Mass of Christian Burial for Art on Friday at 11 a.m., March 3, 2006, in St. Michael’s Catholic Church, 615 N. Center St., Plymouth. Burial will be in Oakhill Cemetery, Plymouth, Ind.
Memorials to Art and the thousands and thousands of hours he made people happy with his beautiful music may be made to St. Michael’s Church.