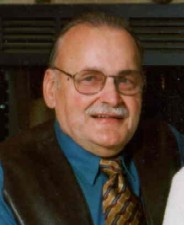 Art Suter, 73, a lifetime resident of Plymouth, passed away on Sunday, June 26th, 2011 at 6:15 am. Art died at Millers Merry Manor of natural causes, in the loving care of family and friends.
His sons who were with him when he passed said that he had a beautiful smile on his face, a trait that he had all of his life. Art said, “Everything that was good in my life was due to a friend or from some special woman supporting me. Anybody that gets anywhere, disabled or not, has to have a lot of help.”
Born in Plymouth on July 30, 1937, he was the son of Ralph & Erma Suter. Art was a 1955 graduate of Plymouth High School. He learned how to walk with crutches and participated in physical activities all of his life.
As a teen-ager he played baseball. He was catcher for two teams. When it was his turn to bat, he did so, with a pinch runner for the bases.
Upon graduation he opened Art’s Saw Shop. In 1963, partnering with his brother Charlie, Art expanded the shop into a Schwinn Bike retail shop, which they ran until 1984. He and his brother made Christmas special for hundreds of Plymouth kids. He estimated that his shop sold about 300 bikes a year.
In 1985, Art became the nightshift dispatcher for the Plymouth Police Department. After 15 ½ years, he retired in 2000. Art was very active in his community. A past officer of Plymouth Jaycees, he was elected to the Plymouth City Council in 1982. He beat the popular Max Schuh by six votes. Art got a special license plate for his blue Thunderbird that read, “V 6.”
He was involved in numerous community affairs, including the United Way and the Chamber of Commerce.
On May 25th, 1979, Art married Margaret “Marge” Hewitt at the First United Methodist Church. Upon their marriage, he became the proud father of Marge’s three boys. His crowning achievement, he often said, was helping to raise Jim, Joe and John.
Art was an avid outdoorsman who loved to hunt and fish. When awarded a wish by the organization Never Too Late, Art chose to take one last fishing trip on Lake Maxinkuckee in May of 2011. He also enjoyed playing chess, watching NASCAR races, and spending time with his family and friends
Art is preceded in death by his father, Ralph, mother, Erma, brother, Charles and niece, Karen Welch.
He is survived by his wife Marge, their three sons Jim Lipa (Lynn) of Chicago, Joe Hopkins (Sandy) of Mishawaka, & John Hewitt (Jennifer) of Plymouth, a sister, Carol Welch (Merle) of Plymouth, and sister-in-law Linda Piper (Gene) of Plymouth.
Also surviving are five grandchildren, Christian, Courtney, Erin, Jeanann, Audra and eight great-grandchildren: Kaitlyn, Cassidy, Matthew, Josiah, Zachary, Locke, Zabram, and Espen.
Friends will be welcomed by the family from 4 to 8 p.m. on Wednesday, June 29, 2011, at Johnson Danielson Funeral Home, 1100 N. Michigan Street, Plymouth, and at the Trinity United Methodist Church, 425 S. Michigan Street, Plymouth, on Thursday, June 30th for one hour prior to the 1:00 p.m. funeral service. Interment will be in Oakhill Cemetery in Plymouth.
Memorials in Art’s memory may be made to: Marshall County Hospice, 112 S. Center Street, Plymouth, Indiana 46563, the Spina Bifada Foundation, P.O. Box 19814, Indianapolis, Indiana 46219 or Never Too Late, 8538 Tidewater Drive, Indianapolis, Indiana 46236.