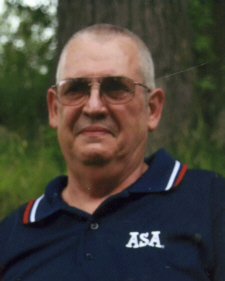 Arthur W. Miller, 63, of 12274 3A Road, Plymouth, died suddenly on Saturday, Aug. 21, 2010, at 9:37 p.m. in the St. Joseph Regional Medical Center, Plymouth.
Born in Hammond, Ind. on Oct. 17, 1946, Arthur was the son of Eli and Lillian Bernice Bixel Miller.
He attended LaPaz High School and graduated with the last class in 1964. He participated with the band and the F.F.A.
On April 20, 1968, Arthur took as his bride Elizabeth Kolar in the Sunrise Chapel in Plymouth.
For 39 years, Arthur was a fork lift technician for K.M.H., South Bend and he also worked at Stephen’s Auto Clinic in Mishawaka.
An outdoorsman he enjoyed hunting, fishing and riding his Victory motorcycle.
He was a member and worked with the Marshall County Civil Defense team for 40 years, and was with the LaPaz Fire Dept. for 20 years. He also was in the Plymouth City Police Auxiliary and the Marshall County Sheriff Auxiliary.
A member of the County Line Brethren Church, Arthur also served as a Boy Scout leader.
Arthur is survived by his devoted wife, Elizabeth, three sons and a daughter, all of Plymouth. His sons are Michael Miller, Matthew Miller, Martin and Suzanne Miller. His daughter, Michelle and Craig Soike, also live in Plymouth.
Five grandchildren also survive. They are Jillian, Eve, Khloe, Eleanor and Colby.
A brother, Roy A. and Kay Miller, together with nieces and nephews and his mother-in-law, Patricia Kolar, Argos, survive as well.
Arthur was preceded in death by his parents.
Friends are invited to share their memories with his family on Wednesday, August 25, 2010, from 4 to 8 p.m. in the Johnson-Danielson Funeral Home, 1100 N. Michigan St., Plymouth. Funeral services for Arthur will be held at 11 a.m. on Thursday, August 26, in the funeral home. The Rev. Wyatt Smith of the County Line Church will officiate.
Interment will be in the New Oakhill Cemetery, Plymouth.
Memorial gifts in Arthur’s memory may be made the church or to the LaPaz Fire Department.