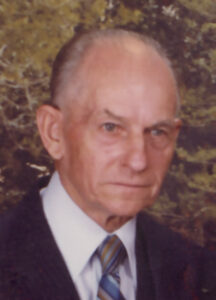 Arthur Harold Zentz, 99, formerly of Argos died Monday June 16, 2008 at 2:30 pm in Miller’s Merry Manor, Plymouth of natural causes.
Arthur was born the son of Argos residents Elmer and Grace Forsythe Zentz on January 8, 1909.
He graduated with the Argos High School class of 1929. On November 5, 1931 he and Glenn A. Sanders of Rochester were married at Bruce Lake. She preceded him in death on July 19, 1998.
Arthur made his living as a farmer in Walnut Township until he retired from farming in 1975. He also drove a hack, modernly known as a school bus, for Walnut Township School in the 1930’s.
He was a member of the Walnut Township Farm Bureau.
Arthur is survived by his daughter Marilyn (Zentz) Calhoun, of Plymouth; three grandchildren Steve (Deborah) Calhoun, of Plymouth; Gary (Ginger) Calhoun, of Argos and Leesburg; and Brian (Pam) Calhoun of Leiters Ford. Two great grandchildren survive as well they are Brandon (Erin) Calhoun, and Allison Calhoun all of Plymouth.
In addition to his spouse he was preceded in death by a son-in-law Donald Calhoun, a brother and sister-in-law Orville (Ruth) Zentz, and a sister Opal Hanes.
Friends are invited to share memories with his family from 1 to 3 p.m. on Thursday, June 19, 2008, at the Johnson-Danielson Funeral Home, 1100 N. Michigan St., Plymouth.
Funeral services will follow visitation at 3 p.m. in the funeral home.
The Rev. Robert Rice from the Walnut Church of the Brethren will officiate.
Burial will be in the Walnut Church of the Brethren Cemetery, Argos.
Memorial gifts in honor of Arthur may be made to the Tippecanoe Watershed Foundation.