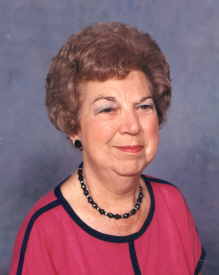 Arvada P. Goodyear, a resident of the Orchard Wing of Miller’s Merry Manor, 635 Oakhill Avenue, Plymouth, for the past five years, died, after an extended illness with Parkinson’s disease, at 5:35 a.m. on Sunday, April 9, 2006.
Arvada would have been 91 on her next birthday.
A resident of Marshall County for most of her life, Arvada was born in Plymouth, the daughter of Sylvester Wesley and Esther Holem Beatty, on October 19, 1915.
She was educated in the Twin Lakes grade school and graduated in 1934 from West High School.
On December 8, 1948, Arvada and Emery A. Jensen were married. Emery died on August 30, 1963. She then married a long-time family friend, Russell Goodyear and lived in LaGrange, Illinois, for 17 years when Russell died on May 2, 1982. She returned to Plymouth in 1983.
For 12 years she worked for the Kroger Company and also was employed in the Marshall County court house for the County Health Department as a registrar.
Arvada was an avid sports fan. She played on the Ida Young Dress Shop’s softball team in 1934 and 1935 and won countless medals and ribbons at county Sunday school track meets.
She loved the Chicago Cubs and Indiana University basketball and Coach Bobby Knight.
Arvada is survived by a daughter, Lorraine L. and her husband Joe W. Frederick of Beaver Dam Lake, Indiana.
Two granddaughters, Chris Cox of Claypool and Karen and James Tharp of Speedway, Indiana, survive her death, together with six great-grandchildren and two great-great-grandchildren.
Her grandchildren are: Lucas and Jen Cox, Tyler Cox and Lindsay Cox and Rachel, Leah and Lorian Tharp.
A sister and brother-in-law, Ruth and John Samuelson and a brother and sister-in-law, Robert and Betty Beatty, all of Plymouth, survive as well, together with 16 nieces and nephews.
Arvada was preceded in death by her parents, her spouses and five brothers: Paul, Ray, Ward, Harold and Carson Beatty.
Friends will be welcomed to celebrate the life of Arvada Goodyear on Thursday, April 13, 2006, from 9:30 to 11 a.m. in the Johnson-Danielson Funeral Home, 1110 N. Michigan St., Plymouth, Indiana.
Funeral services for Arvada will follow visitation at 11 a.m. The Rev. William Kaster, pastor of the Trinity United Methodist Church where she was a member, will officiate.
Burial will be in the Plymouth New Oakhill Cemetery.
Memorial gifts in memory of Arvada may be made to the Trinity United Methodist Church or to the Parkinson Research Foundation, c/o 534 N. Michigan St. South Bend, Indiana 46601.