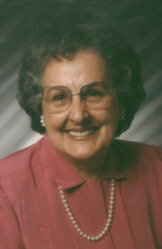 Audrey V. Lee, 75, was received into the arms of her Savior, at 10:10 p.m. on Sunday, December 30, 2007. She passed into eternal life as she had wished, at home in the company of her loving family.
Audrey was born in Baskin, Louisiana, on July 12, 1932, the daughter of Athel C. and Mammie Burch Houston.
On March 12, 1949, in Mississippi. she and Charles “Bud” Lee were married. Charles died in 1971.
Audrey had lived in Plymouth since 1992 and through the course of her life she had worked as a bookkeeper, photographer, and a registered dietician, but she excelled in being a loving and caring Mother, Grandmother, and Great-Grandmother to her family.
After Audrey’s retirement, she turned to crafting and quilting with an enthusiastic zeal. For 15 years, she and her daughter, Brenda, with whom she lived, had booths to sell their exquisite handiwork. She was a regular at the Marshall County Blueberry Festival since 1993. Audrey said once of her prodigious quilting talents, “if it doesn’t move, I can quilt it!”
Audrey loved to travel all over the world but especially enjoyed visiting her sons in Australia every year. No matter where she went, locally or abroad, her one true passion was giving her testimony of her relationship with the Lord Jesus Christ and all that He had done for her, right to the end, which she would tell to everyone she came into contact with.
Audrey is survived by her two daughters Brenda G. and Kiler Richards, Plymouth, and Terry J. and Willy Smith, Parsons, Tennessee; two sons Charles C. “Chuck” Lee, Brisbane, Australia., and Jesse C. Lee, Sydney, Australia.
Eight grandchildren also survive. They are: Angela Nolan, Plymouth; Kimberly Ceballos, Culver; Mark Richards, Toledo, Ohio; Josh Richards, Phoenix, Arizona; Christopher and Douglas Lee, both of Dallas, Texas; Justen “Alex” Lee, Mishawaka, and Cindy Whitsett, Jackson, Tennessee.
Audrey has 16 surviving great-grandchildren. They are: Chase, Kada, Danielle, Ashley, Garrett, Michael, Karah, Scott, Sam, Ellenora, Inez and Jazmin, Melissa, Austin, Grant, and Brylee.
Pauline S. Houston, Audrey’s step-mother of Monroe, La., also survives together with three brothers: Glenn, Gerald, and Vernon Houston.
She was preceded in death by her husband, three brothers, a sister and a great-grandson.
Her family invites friends to share memories and celebrate the life of their mother, grandmother and great-grandmother on Friday, January 4, 2008, from 4 p.m. to 8:00 p.m. at the Johnson-Danielson Funeral Home, 1100 N. Michigan St., Plymouth, Ind.
Funeral services for Audrey will be at 11:00 a.m. at the Plymouth Baptist Church 11345 9A Road Plymouth on Saturday, January 5, 2008. The Rev. Doug Jividen, pastor of the Plymouth Baptist Church where she was a member, will officiate.
Burial will be in New Oakhill Cemetery.
Audrey requested that memorial contributions in her name be made to the Plymouth Baptist Church Building Fund.