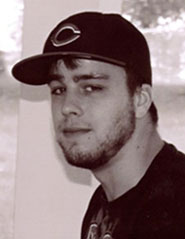 Austin Lee Dean, 21, of 11122 Forest Dr. Plymouth, died unexpectedly Saturday evening at home.
Austin was raised in Plymouth the son of Angel D. (Clark) Pennington who survives. He was involved in the Jr. League Football and as a member of the 2012 graduating class of Plymouth High School, Austin played varsity baseball as a pitcher and third baseman with Jason Peters and John Smith who were a big influence on his playing. He continued summer play with the American Legion Post Baseball. Austin was never materialistic and settled for the simpler more important things in life; his family, friends, listening to music and fishing Dixon Lake just like his Great Grandma McHargue and Great Aunt Goldie often did. They were two influencers in his life that he dearly missed after their passing.
He was raised on Christian beliefs and as a youth, he was involved in the Boys & Girls Club of Marshall County. Austin worked in production with Prairie Mills Products in Rochester a company he greatly admired.
Austin’s presence is already dearly missed by his mother Angel; sister Alexis Lynn Dean; maternal grandparents Nancy L. and Kevin L. Ames; uncles and aunts: Butch and Alesha Clark and Erin Hundt, all of Plymouth; Andrew Clark, of Jackson, TN; along with cousins: Bailey Clark, Kwinten Bunton, Rilynn Ames and Ryen Hundt; and great aunts and uncles that include: Tina and Don Bunton, Dawn and John Sellers, Ruth and Ed Clemons, Bud and Dawn McHargue and Charles McHargue.
He was preceded in death by maternal great grandparents Arnold and Maggie McHargue, great-great aunt Goldie Greer and great uncle John “Tiny” McHargue.
Family and friends will gather to share the loss of Austin Dean from 5 – 7 p.m. on Wednesday, July 15th in the Johnson-Danielson Funeral Home 1100 N. Michigan St., Plymouth where services will immediately follow at 7 p.m. Dr. Jason Pfledderer of Walking with Jesus Ministries presiding.
Burial will be in the New Oakhill Cemetery, Plymouth at a later date.
Memorial gifts may be made to the family.