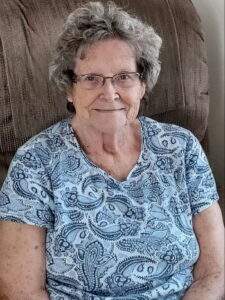 Born on January 26, 1935 in Thorntown, Indiana she was the daughter of Vern and Geneva (Johnson) Fisher. She attended Thorntown High School graduating with the class of 1953.

She married her best friend from kindergarten Bill in November of 1953, he preceded her in death on September 29, 1995. Barbara worked in the cafeteria at Western Boone High School for 33 years before retiring in 2006.

Barbara was known as a sweet and gentle spirit who adored her family, especially her grandchildren. She enjoyed crocheting and knitting and truly known for making dish cloths. In fact, she would make them for just about everyone, even if you just came over as the maintenance man to look at her furnace.

She was a member of Thorntown Christian Church for several years.

She is survived by her daughters: Cindy (Dave) Koester of Hendersonville, TN; Andrea (Tom) Klink of Plymouth; brother Terry Fisher of Indianapolis; grandchildren: Kyle Schultz of Chicago, IL; Kaitlyn Schultz of Carmel, IN; Sarah (Mark) Roberts of Plymouth; great-grandchildren Drew and Benjamin Roberts as well as several nieces and nephews.

Barbara is preceded in death by her parents, husband and brother Ronnie Fisher.

A graveside service will take place on Wednesday, September 7, 2022 at 11:30 am in the Maple Lawn Cemetery, Thorntown with Pastor Glen Jewell officiating.