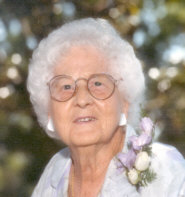 Barbra Post, 89, a Plymouth resident from 1952 until her husband’s death in 1995, died following an extended illness at 10:30 p.m. on Saturday, October 30, 2004, in the Appling Convalescent Center, Baxley, Ga., where she had been a resident for 1 1/2 years.
Born in Amsterdam, Holland, on July 6, 1915, Barbra was the daughter of Wilhelmus and Anna Neeltje Texier Kaarls. She attended school in Holland until the sixth grade after which she went to work.
On March 23, 1938, in Amsterdam, Barbra and Frederick Post were married. Frederik died on September 20, 1995.
A homemaker, Barbra loved to walk and to dance –even in her later years. She attended and helped at the nutrition site at Garden Court West and looked forward to going there every day.
She was a longtime member of the Plymouth Wesleyan Methodist Church.
Barbra is survived by two daughters and their husbands. They are Wilhelmina and Edwin Lashley, Brunswick, Ga., and Anneka Maria and Kenneth Warner, New Carlisle, Indiana.
Seven grandchildren and eight great-grandchildren also survive together with a sister, Annie Neeltje Kerkelaan, Amsterdam, Holland.
Barbra was preceded in death by her parents, her spouse, two sisters and three brothers.
Visitation will be held in the Johnson-Danielson Funeral Home, 1100 N. Michigan St., Plymouth, from 5 to 8 p.m. on Wednesday, November 3, 2004.
Funeral services for Barbra will be held on Thursday, November 4, 2004, at 11 a.m. in the funeral home. The Rev. Greg Bouck, assistant pastor of the Plymouth Wesleyan Church will officiate.
Entombment will be in New Oakhill Cemetery, Plymouth.
Memorial gifts in Barbra’s memory may be made to the Life Enrichment Center of Marshall County.